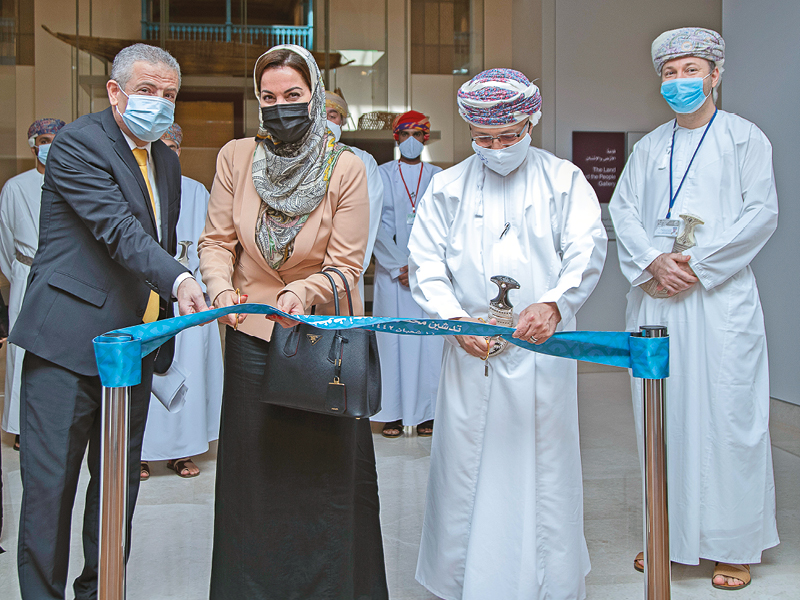 The National Museum has unveiled the original manuscript of Kitab al-fawaid fi ilm al-bahr wa-al-qawaid (The Book of the Benefits of the Principles and Foundations of Seamanship) by the Omani navigator Ahmad bin Majid al Sa’adi in the Maritime History gallery on Monday.

The manuscript that has been loaned from the Al Asad Library in the Syrian Arab Republic was unveiled at a ceremony under the patronage of H E Salim bin Mohammed al Mahrooqi, Minister of Heritage and Tourism and Chairman of the National Museum’s board of trustees.

Commenting on the valuable and rare manuscript, Jamal bin Hassan al Moosawi, secretary general of the National Museum, said, “The showcasing of Ibn Majid`s manuscript in the Maritime History gallery is an affirmation of this unique scientific and historical Omani figure. It came as a part of the existing cooperation between the National Museum and the Directorate General Authority for Antiquities and Museums in the Syrian Arab Republic.”

The manuscript has been loaned to the Museum for two years for the purpose of restoration of this valuable document to its original state in coordination with the National Records and Archives Authority and through the implementation of an integrated programme for preservation, conservation, indexing and revision of the manuscript, Moosawi said.

“This manuscript is one of the few preserved copies of the manuscripts of Ibn Majid around the world. The oldest among them is the one which is preserved in the Institute of Oriental Manuscripts in St Petersburg Russia.”

H E Dr Bassam al Khatib, Ambassador of Syria, said, “We are gathered here today to focus on the depth of the relations between our two countries that have had a permanent impact on the march of the human civilisation. The inauguration of the manuscript is an expression of an authentic, deep and long-term relationship between Oman and Syria.

“It is ready to be presented to the public as a historical document regarding the long tradition of the Omani maritime culture, their history of roaming the seas, conveying thought, religion, trade and communication with the peoples and cultures of the world.”

Ibn Majid and his manuscript

Ibn Majid was an Omani navigator and cartographer, who was born in Julfar. He was educated in his early years by his father Majid bin Muhammad as-Sa’di, himself a renowned marine captain and a navigator. The manuscript was written in the 16th century CE during the rule of Al Nabhani dynasty.

Ibn Majid is one of the best-known navigators in the Indian Ocean and among the finest scholars of the art of navigation and its history among the Arabs. He was the inventor of the magnetic needle (magnetic compass) which is used for navigation and orientation at sea. He was also the author of nearly 40 works of poetry and prose.