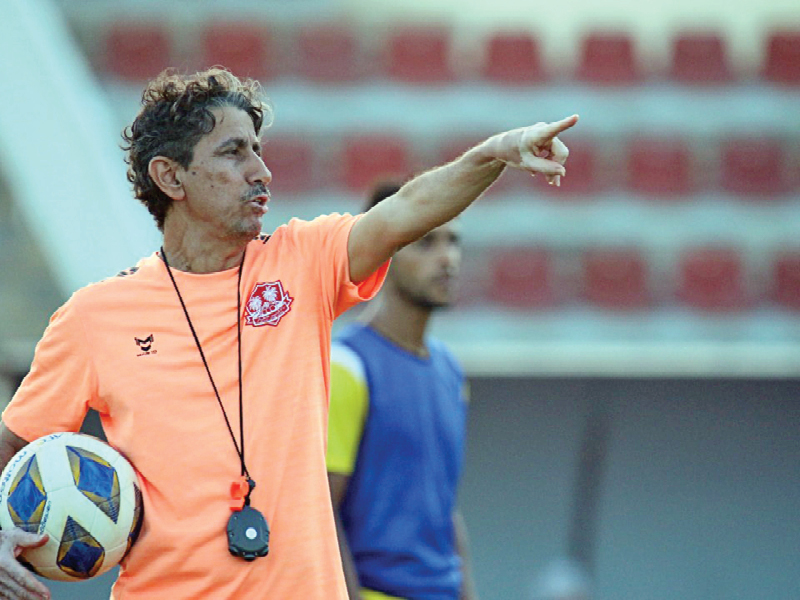 The journey of success continues. For Rasheed Jaber, the coach of the victorious Dhofar Club, which won the His Majesty’s Cup Football Championship for a record tenth time at the Sultan Qaboos Sports Complex on Sunday, the journey with the club goes back to more than four decades.

Having started as a player with Dhofar in 1977, Jaber has experienced agony and ecstasy of a football player and a coach over the past many decades.

But success has been a close ally for this hard-working player and a thinking coach, who has now got the unique distinction of winning back-to-back HM’s Cup title as a player and then having the honour to win the prestigious trophy as a coach on two successive occasions.

Jaber was an integral player of the Dhofar squad, which claimed the HM’s Cup title in 1980 and 1981, a feat that the club repeated on Sunday with a 5-1 win over Al Suwaiq under Jaber as a coach, as he led the Salalah heavyweights to title triumph in successive years (2020 and 2021).

This was also the second time that Jaber has won back-to-back HM’s Cup glory as a coach, the earlier occasion being in 1999 and 2000.

He had tasted his maiden success as a Dhofar coach in the HM’s Cup final when he led the domestic giants to their fifth crown in 1999 with a win over arch-rivals Al Nasr.

Jaber’s Midas touch was evident when, a year later, he led Al Nasr to HM’s Cup glory with a win over Al Arouba.

The individual honours, notwithstanding, Jaber was effusive in his praise of his players a day after Dhofar’s ‘La Decima’.

In his exclusive remarks to Muscat Daily on Monday, Jaber said, “It [back-to-back title wins] is an excellent achievement in a span of four months. A title  repeat is always a difficult task but we took it as a challenge and are delighted to have achieved it.

“Frankly, the roadmap to the tenth title was not easy. After defeating Al Arouba in a penalty shootout last November, I had a talk with my players and we told ourselves, let’s do it!”

Jaber said, “My players responded very positively. Basically, it was more to do with challenging ourselves. We set our goal – a repeat title victory after our success at Al Rustaq Sports Complex against Arouba. And I am proud that my players have achieved it.”

On Sunday’s win, Jaber admitted that he never expected ‘a 5-1 scoreline’. The win over three-time winners Al Suwaiq was an unexpected scoreline and is one of the largest margins of victory in the final of HM’s Cup in recent times.

Terming the result a bit ‘flattering’ Jaber said, “I had expected a much closer and a tough match. I knew that Suwaiq is an organised team under Iraq’s experienced coach Hakeem Shaker and have good experience.

“At half-time, we led 2-1 and I expected them to come back strongly. However, I think Khalid’s [al Hajri] second and our team’s third goal turned out to be the game-changer. They could never come back after that and my players kept on the pressure and managed to pump in two more goals.”

Having achieved a back-to-back HM’s Cup since taking over as Dhofar coach in August 2020, Jaber has now his eyes set for a domestic double, an achievement that eluded the club in 2019-20 season.

Last year, Dhofar finished runner-up to Seeb, who claimed their maiden Omantel League crown.Dhofar got the better of Seeb in the HM’s Cup semifinals en route to their title on Sunday and are currently just two points behind leaders Seeb after ten rounds.

“We now aim to win the domestic top-flight league title that we missed last season.

“We are just two points behind Seeb after ten rounds and I think we have the potential to achieve a domestic double this season,” said Jaber.

The coach said he did not let his players change approach after the club was sanctioned and docked six points ahead of the season by the Oman Football Association (OFA).

Though the matter is still pending on an appeal, Jaber said, “I never spoke about it. My aim is to make the players believe in themselves and win games and we have been unbeaten so far this season in all domestic competitions. We would like to continue in the same vein and hopefully win the league title.”