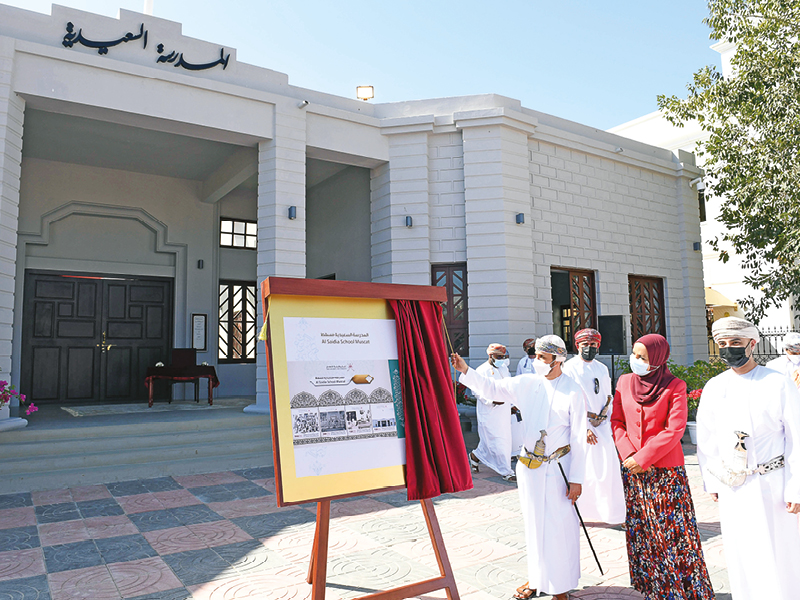 The Ministry of Education celebrated the 80th anniversary of Al Saidiya School, Muscat, on Monday. The celebration was held under the auspices of H E Saud bin Hilal al Busaidi, Minister of State and Governor of Muscat, in the presence of H E Dr Madiha bint Ahmed al Shaibaniyah, Minister of Education, and Nasr bin Badr al Busaidi, director general of Customer Experience at Oman Post.

The event included a message from the Omani National Committee delivered by Amna al Baluchi, the committee’s undersecretary.

“Education in the sultanate has witnessed many transformations and historical junctures, from dhikr circles in mosques, through schools established by scholars, to a new stage when Sultan Said bin Taimour ordered the establishment of the Al Saidiya School in Muscat for regular education in 1940. Students continued to graduate from the school until the year 2000, creating and preparing generations to contribute to building the renaissance of Oman,” Amna said.

“The directives of the Late Sultan Qaboos bin Said transformed Al Saidiya School into a comprehensive educational museum that documents the educational process in the sultanate since the dawn of Islam until the present time. The museum was opened in January 2014 under the patronage of His Majesty Sultan Haitham bin Tarik,” she added.

The museum consists of ten halls showcasing many of the sultanate’s educational achievements in order to introduce the present and future generations to the various stages of education and educational facilities up until the Blessed Renaissance.

Following the speech, the guests and attendees viewed a photo gallery, which displays images of many educational documents presented for the first time to museum visitors, including student records, books, student certificates and administrative circulars. H E Busaidi also inaugurated a postage stamp issued by Oman Post to commemorate the school’s 80th anniversary. The stamp will be available in all Oman Post branches throughout the sultanate.

Among the ten display halls in Al Saidiya School Teaching Museum, the first hall has electronic screens exhibiting images under the theme ‘Necessity of education’. These images show the stages of the emergence of writing in history since the Fourth millennium BC in Sumer in ancient Iraq, as well as the era when writing appeared in the Arabian Peninsula.

The second hall highlights the emergence of education and schools in Oman. The Al Mudmar Mosque built in the year 6 AH (627), is the first documented school in Omani history. The third hall represents education in Oman from the 7th century till the end of the 19th century, when children received their first education in kuttabs.

The fourth hall is dedicated to showcasing Omani schools from the late 19th century to before the Blessed Renaissance, and the role of Omanis in spreading education in East Africa. The fifth hall displays the desks used in the school when it opened, and the records of administrators, teachers and students enrolled in it from its opening until 1973. The sixth hall presents documents and manuscripts about the school, pictures and correspondence about it, and samples of books used to teach its students.

The seventh hall shows the spread of education in the various governorates of the sultanate from 1970 to 1975, while the eighth hall highlights the development of the educational system in Oman through statistics from 1971 to 2013.

The ninth hall highlights the improvement and quality of educational services, alongside information on basic and post-basic education schools, and special education schools. The tenth and final hall is a visual presentation of the stages of higher education in the sultanate, which was not available in Oman until the opening of Sultan Qaboos University in 1986, when government and private higher education institutions began to spread gradually.