Litter not, bitter not! 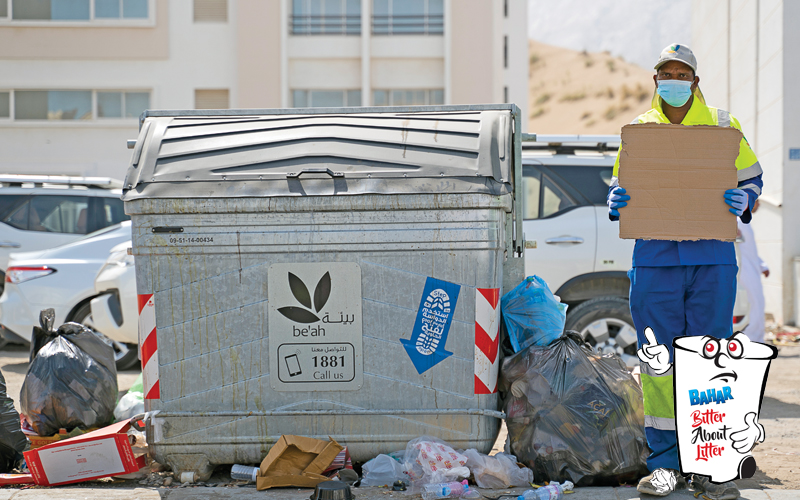 The issue of littering is growing bigger due to the careless behaviour of a few individuals who tend to throw waste either randomly in public places or outside trash bins.

Despite all the efforts by the authorities to spread awareness to minimise the bad behaviour, they continue practicing random littering; not caring for the environment, the waste workers’ efforts, and their own health.

be’ah, the governmental entity responsible for solid waste management in Oman, has had many campaigns seeking to spread environmental awareness to stop littering, and is now studying modernising the system of legislation related to public cleanliness.

“The company has conducted several awareness campaigns to reduce dumping of waste in various regions. We are now studying modernising the system of legislation related to public cleanliness and waste management to reduce this phenomenon and spread awareness among the community,” said Zakaria al Balushi, be’ah’s regional operations manager for Muscat governorate.

Citizens and residents say awareness is much needed.

“I have noticed many bins with trash scattered around them. We need to keep our beautiful country clean. The government is spending a lot of money just to collect and process waste, so, in order to appreciate its efforts towards conserving our environment, the community should be more responsible,” said Sawsan al Ajmi, a concerned Seeb resident.

Another issue of concern is that even those who dispose of waste inside the trash bins, most of the time do not close the lids properly. Trash bins kept open causes many issues like bad odours, attracting stray animals which usually scatter the waste.

“Until the concerned authorities take strict action against the people who use trash bins irresponsibly, the situation is set to remain the same. There is a need for harsher measures to deal with wrong doers,” said Saeed al Habsi, an Amerat resident.

Authorities have confirmed that the practice of littering has increased noticeably in recent times in many public places and residential neighbourhoods despite easy and widespread access to specially designated containers of all sizes.

Bader bin Muhanna al Yaarubi, an environmental engineer in the General Directorate of Health Affairs in Muscat Municipality, said that the municipality has adopted a number of solutions in recent times, including intensifying awareness drives, the direct transfer of waste from some neighbourhoods, and the use of open containers for the ease of throwing waste into them.”

Authorities have reiterated that people need to be more sensible towards the issue of littering and said they are looking forward to increase awareness among the people to help spread the message across.