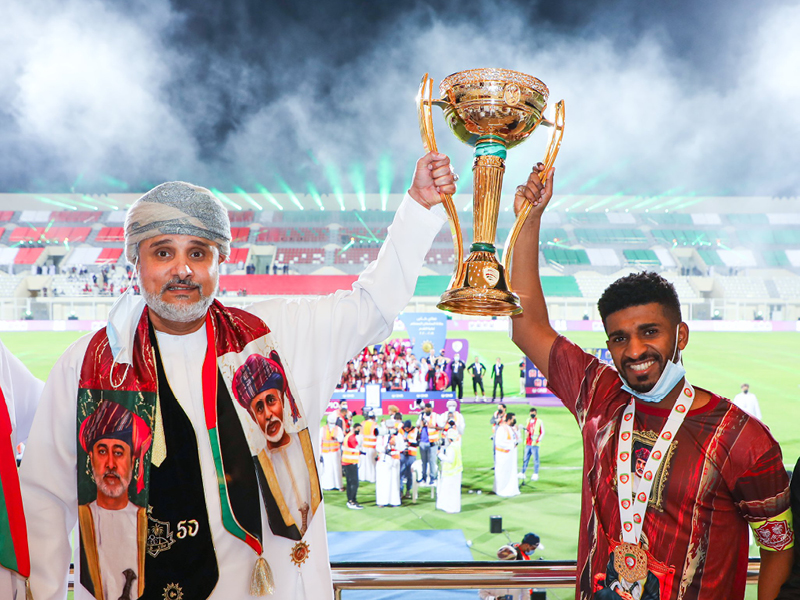 After a night of celebrations on Sunday, the mood among the Dhofar players and officials was euphoric following their historic record-tying ninth His Majesty’s Cup football title at the Rustaq Sports Complex to bring curtains down to 2019-2020 domestic football season.

In a pulsating final, Salalah giants got the better of former champions Al Arouba in a penalty shootout (5-4) to lift the glittering trophy and come level with record holder Fanja. With 11 domestic top-flight league titles and nine HM’s Cup, Dhofar is now the most decorated club in the sultanate’s football history.

It was a perfect finish to the delayed and disrupted 2019-20 domestic football season for Dhofar, who began the season last September with the Super Cup title.

Though, the powerhouse failed to achieve a treble, losing the Omantel League crown to Seeb, the triumph on Sunday made up for the disappointment as Dhofar Club chairman Sheikh Ali bin Ahmed al Rawas and team captain Ali Salim received the trophy and a winner’s cheque of RO75,000 from H H Sayyid Theyazin bin Haitham al Said, Minister of Culture, Sports and Youth along with the club’s honorary chairman H E Abdulaziz al Rawas.

The move worked as Jaber became one of the most successful coaches in the HM’s Cup history on Sunday as he won the third title as a coach. A former striker, Jaber also has the honour of winning the HM’s Cup title as a Dhofar player four decades ago. As a coach, Jaber first won in 1999 with Dhofar Club and claimed his second, a year later, this time with Al Nasr, before Sunday’s success.

The title glory at the Rustaq Sports Complex is also a personal milestone for Jaber as he is probably the only player-coach in Oman to have won the title four times, three times as a coach and once as a player.

Jaber said, “The HM’s Cup is the most prestigious tournament in Oman. We were disappointed that we couldn’t win the Omantel League, but this Cup definitely makes up for our runner-up finish in the league.”

“We deserved the title. Al Arouba put up a good fight. My players handled the nerves better in crunch situations better than their counterparts.”

Speaking after the title success, Sheikh Ali al Rawas, said, “It is always one of the primary goals of our club every season to win the coveted HM’s Cup. Having now tied with Fanja, my goal is to claim a record tenth in the coming season. I hope to achieve my dream.”

The club chairman said that the 2019-20 season was full of challenges due to the COVID-19 pandemic. “Notwithstanding all the obstacles, our team managed to achieve glory with the HM’s Cup title. Personally, it has been a hectic season, as I have been involved with smallest details at the club. It feels good to see my efforts and the hard work of players, coaches and other staff have reaped awards.”

With COVID-19 pandemic protocols in place across the sultanate, the players are expected to arrive in Salalah on Tuesday without much fanfare.