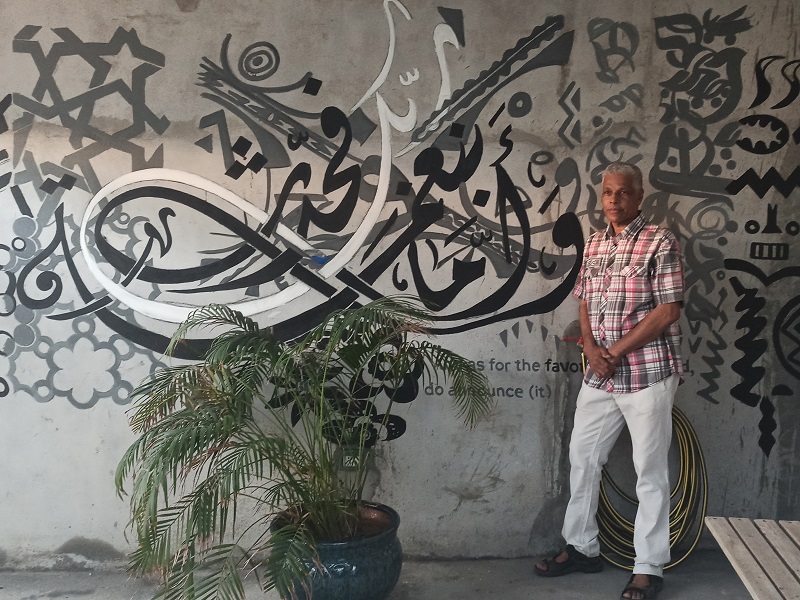 I experience colour… I live inspired! Graffiti like this on the exterior wall of his villa seems to convey a magical experience to all who call on him. And soon it dawns upon the visitor, that Madny al Bakry, one of the most popular, talented, and senior artists in Oman, doesn’t quite live with art… Art lives with him!

A maverick with colours and concepts, an erudite artist, and an eloquent speaker that he is, Madny doesn’t need any introduction – his art speaks volumes about his skill with the paintbrush. And every canvas created by him is not just a work of art but a visual trap that can capture the viewer and send him in a tizzy in an instant.

When you visit this artist at his residence, a stone’s throw off the first traffic intersection on 18th November Street, you would notice that the celebration of colours and patterns begins right from the compound that surrounds his dwelling where one is greeted with greenery galore, an interesting seating space, waterfalls, thought-provoking graffiti and, above all, a world of artistic fantasy waiting to be discovered behind the main door.

Madny has newly created his very own gallery adjacent to his studio within his residence where he has put up a fabulous display of his latest collection of what he terms as ‘Calligafric’, a new spin on ‘Calligraffiti’ (which was once coined by him to categorise his art but unfortunately got usurped by others due to wide exposure on the internet). The new collection includes a set of huge canvasses of abstract motifs interspersed by dynamic Arabic graffiti, all in vibrant hues that reflect the eternal cultural ethos of Africa. He has also taken this new art a step forward by infusing it with what he calls ‘human patterns’ that are symbolic of the essence of cultures from around the world and which have a universal appeal.

As you enter his abode, you discover that right from the foyer to every passage and in every room the walls are adorned with his paintings turning the entire house into an art gallery of sorts. Madny has found artistic expression for his creativity in diverse ways, from abstract art, to landscapes, and even in photographic essays, since he also is a skilled photographer who has published many books on photography, capturing diverse aspects of life in Africa, especially Zanzibar – his birthplace.

Over the past few decades, Madny has travelled around the world and not just exhibited his explicit works, some of which have been installed in prestigious institutions, but also delivered lectures to diverse audiences comprising artists as well as art lovers.

When asked how art has influenced his life over the years, Madny disclosed that after studying art in the US, he began his journey as a textile artist. However, in Oman, it was always a hobby that he pursued side by side with his profession as a sports advisor in the Ministry of Sports from which he has now retired.

Madny further disclosed that, after painting for years and selling his art routinely, he had craved for recognition and had asked an accomplished photographer friend of his how he could get there. The friend told him that he needed two aspects to gain recognition – a unique individual style and an understanding of what appeals to the art world. Taking a cue from that, he developed his own style, backed with his robust grasp of the Arabic language and combined with his love for strong colours, and it now has a great demand internationally.

Madny’s ability to observe, process and store all his visual experiences in his brain, like a hard disc, has given him numerous inspirations for all his creations. And he makes it a point to construct every painting with a focal point and a balance of patterns and colours such that they do not lead the viewer out of the painting, rather they hold onto him and compel him to move from element to element within.

“None of my paintings are complete. There is always something that can be added or corrected in every work. So, we leave completion, as an aspect, to the creator – only He has the power to complete something,” he said, adding, “All my works, though they are up on the walls, they are subject to change. I say, they are ‘abandoned’ not finished!”