Pedal power in Vietnam and Cambodia 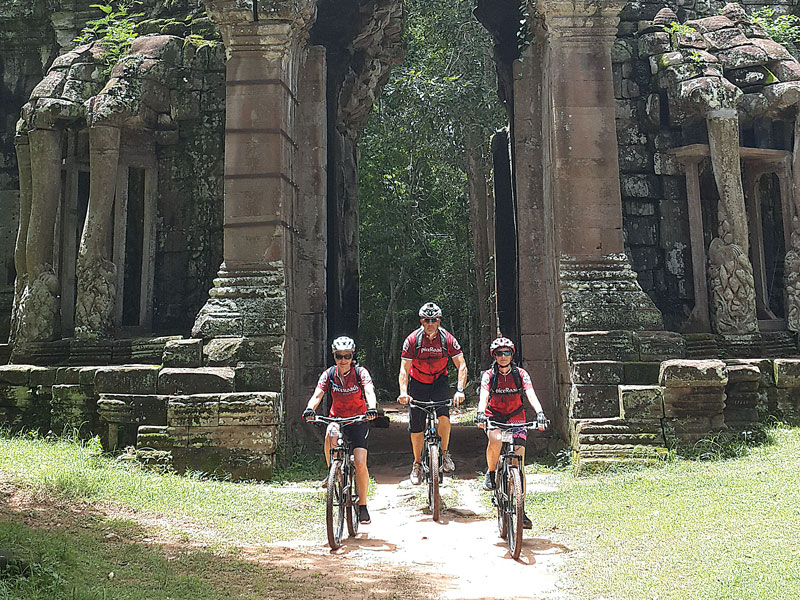 During the current travel restrictions due to the COVID-19 crisis, here’s a story that may offer an option for your next adventure holiday. There can be few better ways to experience a new country, than to cycle through it.

With my wife, sister and brother-in-law, we embarked on a (largely) self-powered journey that took us through two remarkable nations – from Vietnam’s largest city, Ho Chi Minh, to North West Cambodia’s Siem Reap, gateway city to the Angkor Region.

Three hundred kilometres of the journey were on two wheels. Our guide for the tour was, Vu Ton, a qualified Vietnamese bicycle mechanic from tour operator ‘Spice Roads’ specialists in Asian cycling adventures.

We began our trip with a day in Ho Chi Minh City and a visit to a unique historical site that takes you back to the days when the city bore its former – and still commonly used – name, Saigon. The Cu Chi tunnel complex was instrumental in the 1960-1975 Vietnam war (referred to locally as the ‘American war’). The outcome of the conflict was largely influenced by the ingenuity and ferocious dedication of the communist army and these tunnels were its means of shelter, communication and deadly surprise in attack.

Although the tunnels have been widened and reinforced to enable tourists to safely crawl inside, they still provide an incredible insight into how difficult life would have been. There are some original sized entrances that visitors can enter – if they can fit. These are not recommended for those suffering from claustrophobia.

Time to get on our bikes. A two-hour drive south of Ho Chi Minh took us into the Mekong Delta, where we picked up our two-wheeled transport for the days ahead. The trek started with a 42km route to an area called Bai Ce. We cycled along local paths through residential areas connected by raised concrete pathways that, in most cases, are no wider than the average sidewalk.

Avoiding mopeds and dogs is a pre-requisite for safe passage. We crossed three of the Delta’s nine rivers by ferry and frequently criss-crossed others via quaint bridges. Throughout the day the locals shouted warm greetings and gave us local fruit called longan, similar to a lychee but much sweeter. A dinner of grilled ‘Elephant Ear fish’ – a big round river fish that resembles, well, an elephant ear – and an early night ready for a 90km slog tomorrow.

The clouds threatened rain as we set off from our hotel by boat at 7.30am and crossed the Tai Tien river to An Binh island. The Mekong Delta is a busy waterway and its many tributaries reveal a hive of industry from fishing to dredging. Mekong means ‘Mother River’, named to reflect its provision of food and economic prosperity.

Our 90km ride began with winding our way to the Co Chien river for the first ferry crossing. A vicious storm arrived and whipped the 1km wide river into a frenzy in seconds. The ferry was suspended until the storm blew over and we sat with a group of local farmers and learned how they make their living from rice. Everyone is so friendly and eager to engage in conversation.

Once across the ferry to ‘Long Island’ we cycled on to join another boat that would take us to ‘Vung Liem’ town for some lunch of meat and noodle soup. The restaurant was actually a family’s bedroom converted for our arrival. We all felt humbled by the local people we met today and this means of travel is certainly the best way to experience rural Vietnamese life, and hospitality, up close.

A 15-minute trip down river from our overnight stay in the city of Can Tho took us through the bustling floating markets of Cai Rang and on to our start point for today’s 60km ride to Vin Treh. The first 25km meandered along residential pathways that hugged yet another Mekong tributary. This stage of the tour was rudely interrupted by a violent thunderstorm and such heavy rain that we had to stop and seek refuge in a street side coffee shop.

Vietnamese coffee is served black and very strong with a side helping of condensed milk. A good caffeine kick for the rest of the ride – west towards the Cambodia border, which we would cross tomorrow by boat.

We reached the border of Cambodia in the Mekong Delta and today was a rest from the saddle as we headed north on the Mekong River to our next stop, Phnom Penh, Cambodia’s capital.

The boat picked us up outside the hotel at 7am and the three-hour trip include a border stop for Cambodian visas at a riverbank immigration post. Once in Cambodia we visited one of its most poignant sites. The country suffered unimaginable horrors under Pol Pot and the Khmer Rouge from 1975 to 1979. Our afternoon takes in one of 400 areas known as ‘The Killing Fields.’

In this camp 17,000 people were murdered and buried in shallow graves. The total death toll under Pol Pot was more than two million. It is a sobering glimpse of one of history’s worst ever atrocities.

Today’s cycling route took us 45km north west of the centre of Phnom Penh to Odong Mountain where the king of Cambodia had Buddha’s bones interred in 1996.

The terrain was challenging. Deep mud on farm tracks gave way after 10km to pot-holed main roads and sandy tracks. We cycled in 35C and a persistent headwind that quickly sapped our energy. As in Vietnam, the local village children shouted greetings along the way, intrigued by the lycra-clad strangers, and that helped keep the spirits up.

This felt like a tough ride and immediately after dismounting, the 500 steps to the top of Odong Mountain hurt. A street food lunch from local vendors featured delights such as fried ants eggs and barbecued frogs – odd fuel for a tiring day.

A ride of 37km today was sandwiched between two long stints in our minibus. We headed north from Phnom Penh towards our final destination of Siem Reap, known as ‘The Great Gate’ to the Angkor region, famous for the ancient temples of Angkor Wat. After two hours we pulled into a roadside market and sampled fried tarantula and crickets. This staple of the rural Cambodian diet and a useful source of protein, was ‘enjoyed’ while live spiders explored our upper bodies – a little game the locals like to play with tourists!

Both delicacies reminded us of Chinese crispy duck, but a little saltier and chewier. After our snack, our mildly undulating route passed through villages and paddy fields, speckled with people tending the rice crops, and more excited children calling ‘Hello’. Caked in mud, we finally arrived in the very pretty and bustling provincial town of Siem Reap.

The final leg of our fantastic journey was spent cycling 35km from Siem Reap to the Angkor Wat temples. These ancient ruins are a UNESCO World Heritage Site and attract some 12,000 visitors daily – even in low season, there were large crowds at each site.

The first temple was Tah Promh, made famous in 2003 by the ‘Tomb Raider’ movie. We then passed through the Bayon temple after 15km and headed for the main event, the Angkor Wat temple. This twin towered 12th century edifice is a wonderland of stone carving. It is a hugely revered site and aircraft are forbidden to fly over it, while no building in Siem Reap may be taller than its towers.

The last leg was a gentle cycle along off-road trails through the jungle to our hotel.

TIRED BUT HAPPY
This epic journey more than exceeded our expectations. During eight days we cycled 300km and experienced two distinctly different, but hugely interesting, nations. While both had endured dark chapters and unimaginable suffering, we were welcomed by smiling, hopeful people everywhere we went. While their horrors are not forgotten, they appear to be moving on to build a new future.

(For further details on cycling tours in Asia, go to: www.spiceroads.com)