Harvesting the ‘symbol of peace’ 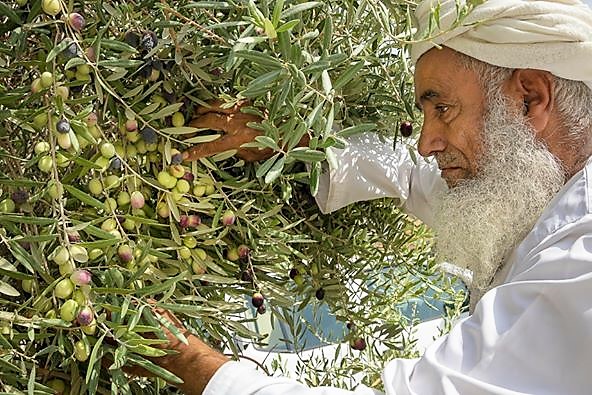 The olive harvest and oil-extraction season, which begins this week in villages at Jebel Akhdar (The Green Mountain), in the Governorate of Dakhliyah, is a much-awaited, as well as lucrative, annual exercise.

The olive tree, considered one of the most beloved, sacred trees, has its place  firmly rooted in Ancient Greek tradition and mythology. Traditionally, the olive tree is also considered a symbol of peace and friendship, an association which began in ancient Greece sometime in the fifth century.

Known to survive harsh climates and soil, olive trees require little in terms of nutrition and, research shows, that they have evolved over the centuries even in poor, rocky soil. Olive trees have hence been found in different parts of the Middle East where they have survived for centuries.

In Oman, the olive mill of the Ministry of Agriculture, Fisheries and Water Resources in Seih Qatna, in Jebel Akhdar, has now begun to receive the first production from farmers in the wilayats of Izki, Ibri, Bahla and Nizwa. The olive trees brought to these wilayats, which were suitable to the sultanate’s climate, have been successfully cultivated.

Eng Salim bin Rashid al Tobi, director of Agricultural Development Department in Jebel Akhdar, said, “Usually the olive harvest season starts at the end of August every year. In addition to the efforts of the Ministry and its mill, the private sector played a clear role in supporting efforts to benefit from olive production by setting up a mill, two seasons ago, to serve farmers. On August 28, the mill will receive olive crops from all villages of Jebel Akhdar and the residential areas, whether in agricultural lands or home gardens.”

He pointed out that when the ministry adopted the project for olive oil extraction and planting its trees, the goal was to introduce its cultivation in home gardens and not in agricultural lands currently growing fruit trees. This goal has been achieved as the production rates increased in the past years. Production reached more than 60 tonnes in 2019 while 8028 litres of oil were extracted from that stock.

Tobi added, “The olive harvest season will continue until December, depending on the variety of the olive species. The increase in the number of olive trees and the farmers’ care for them prove that olive will represent a rewarding economic return, along with other fruit trees in the villages of Jebel Akhdar.”

He further explained, “The introduction of olive tree cultivation in low-lying areas, such as the wilayats of Izki, Ibri, Bahla and Nizwa, has achieved success during the past years and production has increased in good quantities in 2020 through identification of good varieties for extracting oil or for making vinegar,”

Regarding olive tree production, Dr Qais bin Saif al Ma’awali, director of Agricultural Development Department, in Samad A’Shan in the Governorate of North Sharqiyah, said, “The ability of the olive tree to produce acceptable and marketable olives in terms of fruit size, shape and colour has become clear, especially if it has a relatively cold weather, as the olive tree needs less than 200 cooler hours to break the dormancy.

“So, if it is planted in a suitable place and in a cooler weather, in comparison to the interior region of the sultanate, with average minimum temperatures between 8 or 10 degrees Celsius during winter, it would have been enough for the tree to break the dormancy. I expect a bright future for the olive tree in terms of ability to produce high-quality fruits in commercial quantities.”

Statistics available with the Ministry of Agriculture, Fisheries and Water Resources indicate that the number of olive trees in Jebel Akhdar is more than 15,000 trees. These have adapted to the harsh, dry climates and the scarcity of water.

Because of the benefits of olive oil, this tree has received great care from the Ministry of Agriculture, Fisheries and Water Resources by adopting the olive oil extraction project, which had a great impact on pushing citizens to take adequate care of this tree and its exploitation economically, besides other fruit trees grown in the region.