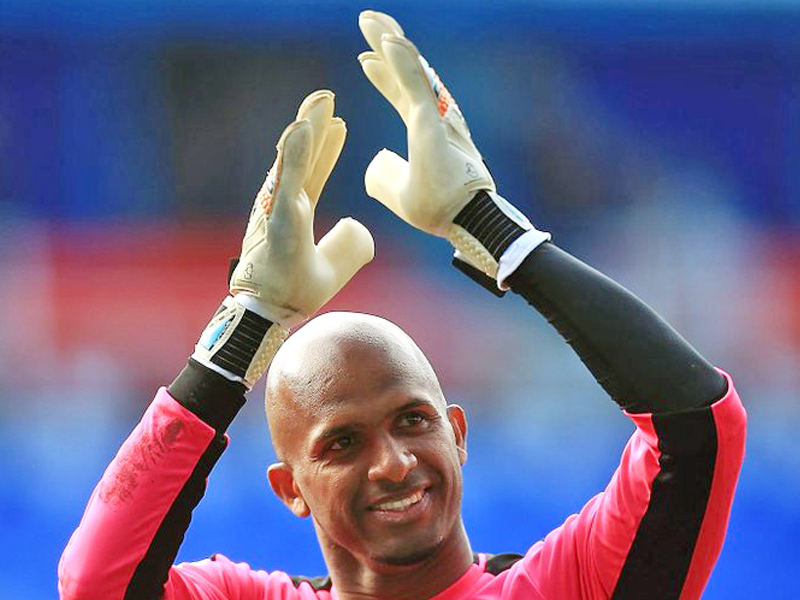 He has been the epitome of success for Oman sports. The sultanate’s greatest ever footballer, Ali al Habsi, announced on Friday that he is hanging up his gloves after 22 years. His announcement came through his own Twitter handle and in an Instagram post signalling an end of an era of Oman football.

The 38 year old, who became the first Omani to play in Europe and later in the English Premier League, raised the profile of Oman football with his stellar display on the pitch and was a role model for Omani youth.

The soft-spoken and tall goalkeeper had earlier in January retired from international football and had been on a deal with English Championship club West Bromwich Albion till the season end. He did not appear for the club, which got promoted to the Premier League last month.

In June, West Brom released Habsi, and with the coronavirus pandemic restricting travel plans, the goalkeeper was, of late, spending his time in his home town, Mudhaibi, pondering about his future.

On Friday night Habsi tweeted, “After years in which I had the honour to represent a number of clubs , today I announce the end of my career as a football player. I express my sincere thanks to everyone who has supported me throughout my career, confirming my continued service to my country from other locations.”

During his glorious 22 years of career, Habsi played in four countries and with nine clubs, besides leading the national team.

For a teenager from Mudhaibi to be the only Arab player to lift the FA Cup trophy with Wigan Athletic, the journey was made possible, thanks to former Oman goalkeeping coach John ‘Budgie’ Burridge.

It was Budgie who facilitated his move to Europe, first with Norway’s Lyn, and then his switch to Bolton Wanderers in the English Premier League after three successful years with Lyn.

After Bolton tenure, Habsi moved to Wigan Athletic in 2011 and stayed till 2015 before moving to Reading. In between, Habsi was on loan to Brighton & Hove Albion. Following his stint in English football, Habsi decided to move to Saudi Arabia with a successful spell of two years with Al Hilal from 2017-19.

Last year, he moved back to England after signing a deal with West Brom before calling it a day.

One of the only eight players from Oman to have made 100 appearances or more, Habsi was instrumental in Oman’s maiden Gulf Cup win in 2009 in Muscat. He also had a key role in Oman reaching the earlier two finals of the Gulf Cup in 2004 and 2007.

With Al Hilal, Habsi won the Saudi Professional League title in 2017-18 and also the Saudi Super Cup in 2018. Habsi was also part of three AFC Asian Cup finals for Oman and finished his career with a total of 135 international caps.

In 2012-13, Wigan were relegated from the Premier League, but remarkably beat the previous season’s champions, Manchester City, 1-0 in the FA Cup final in 2013 at Wembley. Habsi was on the bench, but his winner’s medal made him the first player from the Gulf to win the world’s oldest competition.

On social media, tributes for a beloved legend poured in from the Gulf, the Middle East and Europe, including his old team Wigan Athletic.

In his remarks to Muscat Daily, Burridge, the coach who was behind Habsi’s move to Europe said, “I am shocked. He is still fit to play for couple of years more. He is 38 and he is still a great goalkeeper.

“He is the greatest Omani footballer as he is the only player who has played at the top-most football level – English Premier League. He got in touch with me two days back and told me about his decision. I was disappointed but he has his own good reasons and I respect that.”

Burridge said that Oman ‘should capitalise on his excellent record’ and ‘Ali should take over as the national coach in the next couple of years’.

The Englishman lamented that not many Omanis could follow Ali to Europe despite having good talent.

“Getting the first [Ali] to move to Europe was difficult but after that it is rather easy as Oman has the talent,” he said.

Habsi’s former teammate and star striker, Imad al Hosni, who, too, had a short stint in Europe, said, “Habsi served Oman football in the best possible manner. He had a very successful career with Oman and various clubs in England. A great, Ali will always be remembered by whole of Oman for his contribution. He is a role model and an example for young players and future generations to emulate.”

Ahmed Mubarak ‘Kano’, Oman team captain, tweeted, “You are a role model with great experience. A top professional, you are the face for Omani and Arab sports. Thank you for all your achievements, and good luck to you for your future.”

Mohammed al Mashari, another Oman international footballer, said, “Ali al Habsi is an ambassador and the best example for Oman football. Every Omani and Arabs from the Gulf region are proud of his accomplishments. He is an example of how a player should be professional and disciplined. We hope Ali will serve Oman football in the administrative or technical field in future.”

Former Wigan colleague Mike Pollitt tweeted: “Best of luck my friend, one of the nicest guys I have met in football. I’m sure you will be a success in whatever you decide to do next.”

Wigan Athletic tweeted: A fantastic representative of our club during your five years with us, Ali! Over 150 appearances with so many special saves and memories! We wish you well in the future and hope to see you again soon!

Bolton Wanderers in their tweet said: Happy retirement Ali, and all the best in the future. Thanks for your efforts during your time with Wanderers! while Reading said: “Two years Player of the Season. One Ali Al-Habsi! A fantastic career. Enjoy your retirement @AliAlhabsi!

Oman Football Association (OFA) also congratulated ‘legendary Habsi on his wonderful career and his great efforts to serve Omani sports’. The OFA wished him success for his future.