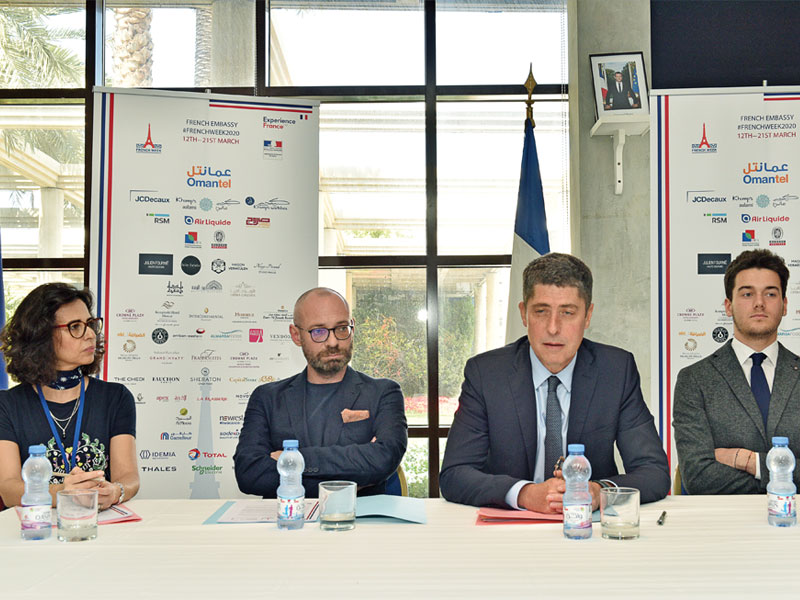 The third edition of the French Week in Muscat, organised by the French Embassy in Oman, will be held from March 12 to 21. Announcing the annual feature at a press meet on Wednesday, H E Renaud Salins, the French Ambassador to the sultanate, said, “For ten days, Muscat is going to turn French.”

Started in 2018 with the objective of enhancing relations between France and Oman, both economically and culturally, the last edition drew 10,000 visitors, H E Salins told the attending media personnel.

“Last year, 25 French companies came to participate in various events held within the week. This year, there are more elements and so we expect a bigger turnout,” H E Salins said. The focus of the third edition of the event is France’s culture, cuisine and business in events held across various locations in the city, including the Ambassador’s residence, Opera Gallery, Centre Franco-Omanais and celebrations of French cuisine in prominent star hotels in the city.

Additionally, French food products will be available at 20 per cent discount at Al Meera Hypermarkets, while Carrefour Seeb will have a French food corner during the event. Highlights this year include a conference on ‘Building Sustainable Cities’ on March 12 at Crowne Plaza Muscat spearheaded by the Economy Desk of the embassy which will focus on how human populations can resolve contemporary issues such as global warming, globalisation and intermodal transportation.

‘French Stylish Savoir-Faire – A journey through French Luxury’ at Opera Galleria from March 16 to 21 is an exhibition featuring three Parisian houses – ‘Feathers’ by Maison Julien Vermeulen, ‘Jewellery’ by Julie Eulalie and ‘Stitch’ by Aloys Picaud Studio Maille. An exhibition titled ‘Oman 1977 – Tribute To Eternal Oman’ at Bait al Baranda from March 18-27 is expected to be a big draw. The exhibition will feature photographs taken by the French journalist and reporter Suzanne Held during her visit to Oman for the inauguration of InterContinental Muscat.