$4.3mn crystal meth seized from dhow in Sea of Oman 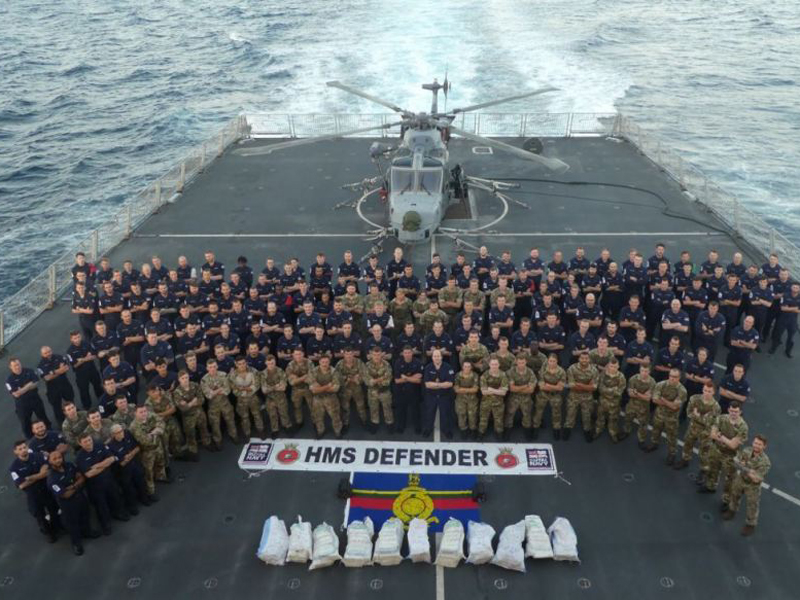 The multi-national security task force manning international waters has seized 131kg of crystal methamphetamine, with an estimated street value of US$4.275mn from a dhow in the Sea of Oman.

HMS Defender, a UK Royal Navy destroyer operating in the Sea of Oman in direct support of the Combined Task Force 150 (CTF 150), seized 131kg of crystal methamphetamine from a dhow they had been following.

CTF 150 has seen a huge increase in the amount of crystal methamphetamine being smuggled year-on-year, with 257kg interdicted to date in 2019, versus only 9kg in 2018.

‘The suspicious vessel was first detected using HMS Defender’s ‘Wildcat’ shipborne helicopter.  HMS Defender then closed in on the dhow and a team of Royal Marine Commandos in Pacific 24 sea boats boarded and secured the vessel. It was then searched by a Royal Navy boarding team who found 11 packages of narcotics, with an estimated regional wholesale value of US$280,000,’ CMF stated.

According to the UK Royal Navy, the drug haul is estimated at a street value of £3.3mn (US$4.275mn).  The Commanding Officer of HMS Defender, Commander Richard Hewitt, said, “I am really proud that HMS Defender has been able to interdict such a significant quantity of drugs and prevent it reaching the streets. Even over the festive season, the Royal Navy is at sea 24×7 working as part of Combined Task Force 150. This has been a real boost for the ship’s crew members as they face Christmas away from their loved ones.”

“This is the second narcotics shipment in a week we’ve kept from reaching its destination,” said Commodore Ray Leggatt, Royal Australian Navy, Commander of CTF 150. “With this action, and more to come, we are impacting terrorists’ ability to operate in this region and around the world.”

Australia assumed command of CTF 150 in early December, with a staff made up of personnel from the Royal Australian, Royal Canadian, and Royal New Zealand navies.

CTF 150’s mission is to disrupt terrorist organisations and their related illegal activities by restricting their freedom of manoeuvre in the maritime domain.  The activities of CTF 150 are a critical part of global counter-terrorism efforts, as terrorist organisations are denied a risk-free method of conducting operations or moving personnel, weapons or income-generating narcotics and charcoal.