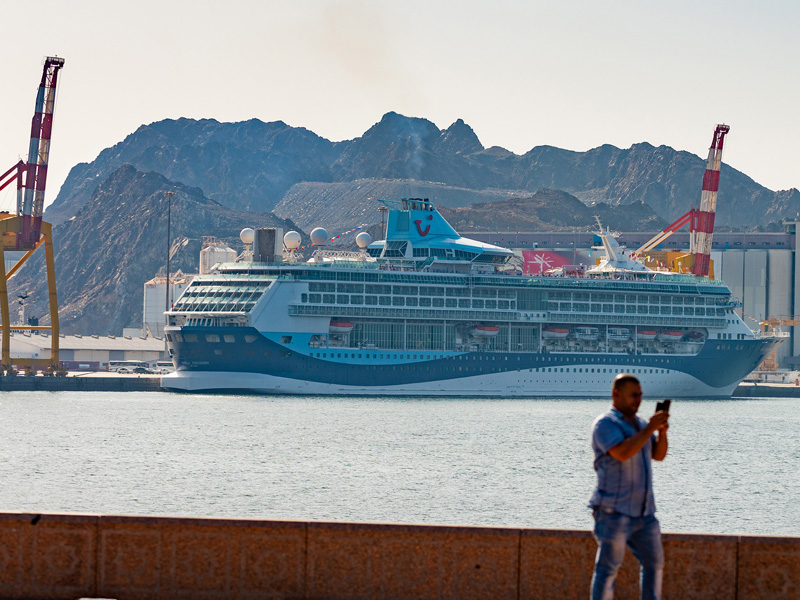 Muscat – After the success of the two biggest passenger turnarounds in November 2018 and April this year, a similar feat will be accomplished by the port and airport authorities in Muscat on Thursday and Friday.

The port and airport will handle and transfer 1,400 British travellers each in around 36 hours. The exercise will see cruiseliner Marella Discovery berth at Port Sultan Qaboos (PSQ) on Thursday and 700 passengers will disembark over the next 36 hours while a similar number will embark.

Over the same duration, 700 British passengers will arrive at Muscat International Airport from airports in Gatwick, Manchester and Birmingham. A similar number will depart from the Muscat airport via the same flights to the UK.

A repeat of this exchange is also scheduled for April 2020. ‘This exercise supports our plans as part of the Oman Tourism Strategy to promote cruise tourism sector as well as transform the ports of the sultanate as hub for cruise ships, acting as a launch pad for regional cruise tours,’ the Ministry of Tourism stated.

The ministry said that an exercise of this scale has necessitated close coordination with the ROP, Marafi and Oman Airports. ‘Private sector entities like Travco Oman and Khimji Ramdas Projects and Logistics, tourist agent and shipping agent respectively, play an important role in ensuring the success of this exchange.’

MoT said that it has agreed with Marella Cruise International that Oman will be a hub for arriving and departing tourists during the forthcoming seasons. ‘Marella Discovery will organise around 27 visits to the ports in Oman for the 2020-21 season, including 16 visits to PSQ, eight to Khasab port and three to Salalah port.’

Under the agreement, the fifth passenger exchange will take place in November 2020 and the sixth in April 2021. This will also include two visits to Khasab port and three to PSQ. According to the ministry, in 2018-19 cruise season, 298 port calls were made by cruiseliners with Oman receiving around 193,500 passengers.

Marella Discovery will leave from Muscat on November 22 evening on a 14-day cruise to Pulau Langkawi Island, stopping in Mumbai, Goa, Mangalore, Kochi in India, Colombo in Sri Lanka, Pulau Weh Island, Sabang in Indonesia, and Phuket in Thailand on the way.