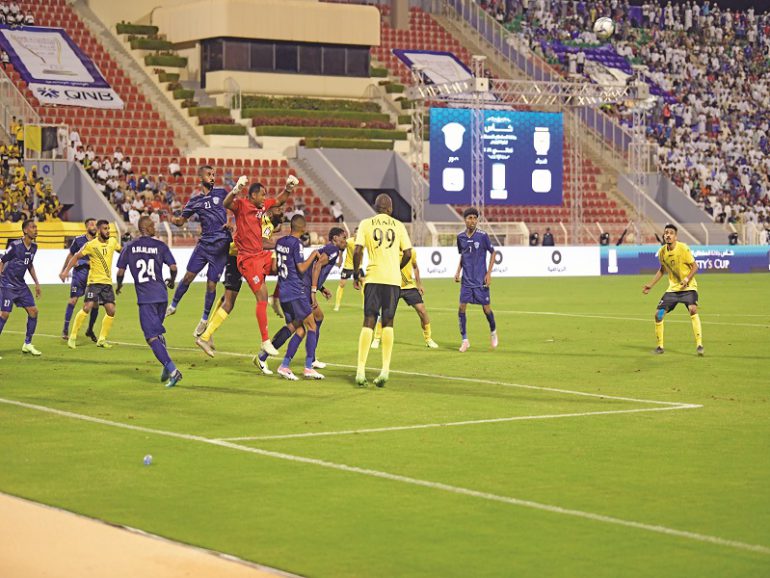 Defending champion Sur will once again stand in the way of nine-time winner, Fanja’s bid for its tenth title, as the two domestic giants were drawn against each other on Monday in the prestigious His Majesty’s Cup Football Championship knockout round-of-16 stage.

The mouth-watering clash between the two champions that share a total of 13 titles will be played at the Seeb Sports Stadium on November 7, Thursday. The match kicks off at 4.40pm. The two teams had in April fought for the 2018-19 title honours with Sur edging past Fanja 2-1 in a thrilling summit clash at the Sultan Qaboos Sports Complex (SQSC). It was Sur’s super-sub Aiman al Mukhaini’s extra-time goal, which got the Sharqiyah club its fourth crown.

For Fanja, which survived a huge scare in the round-of-32 earlier this week against unfancied Bidiya, winning in a shootout, it will be an opportunity to settle scores on its mission for the elusive tenth crown. Fanja last won its record ninth title in 2014.

In the other match-ups, eight-time winner and a top contender, Dhofar, will host three-time champion Seeb on November 8, Friday (7.45pm kick-off), and in another match featuring former winners, Salalah heavyweight, Al Nasr, which has won the title five times, locks horns with two-time winner Saham at the Sohar Sports Complex on the same day in an early kick-off (4.45pm).

Also, 2017 champion Al Suwaiq faces a tricky game on road as it takes on hosts Al Nahda at the Al Buraimi Sports Complex on November 7 (7.40pm kick-off) while Oman Club hosts Nizwa at the ROP Stadium on the same day. The match kicks off at 4.40pm. Rounding off Thursday’s fixtures will be the match between Ibri and Bahla at the Ibri Sports Complex with a 6.30pm start.

In the other two matches to be played on Friday, Al Shabab takes on Al Rustaq at the Seeb Stadium with the match starting at 7.45pm and four-time winner Al Arouba hosting 2106 finalist Al Khabourah at Sur Sports Complex in an early kick-off (4.35pm). The draw ceremony was held on Monday in the presence of Said Othman al Balushi, the CEO and general secretary of the Oman Football Association (OFA), Faisal al Tamimi, Acting General Manager of QNB, the title sponsors, and other senior officials and representatives of the participating clubs.