Oman goes down fighting to Qatar 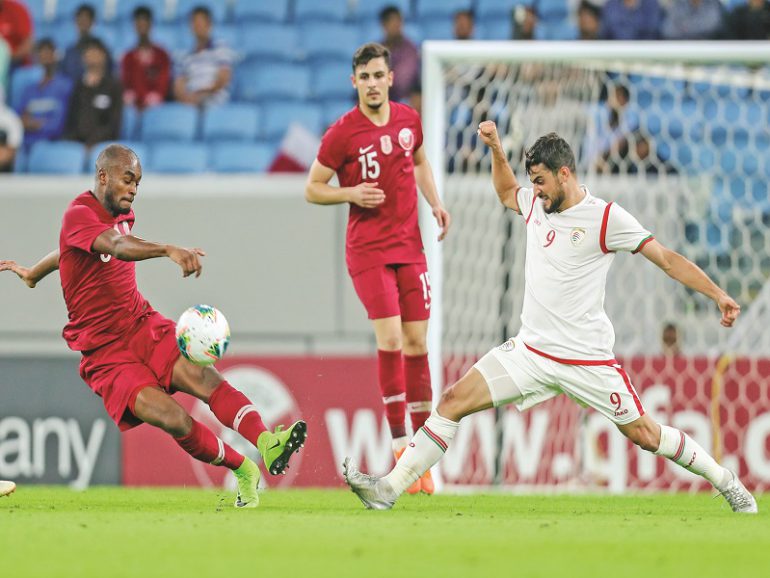 Doha, Qatar – A gritty Oman gave the hosts and Asian Cup champion Qatar a scare before going down 1-2 in a Group E game for the FIFA World Cup Qatar 2022 and AFC Asian Cup China 2023, at Al Janoub Stadium in Al Wakrah on Tuesday.

The win saw Qatar stay unbeaten in the Qualifiers and on top with ten points. It was the first defeat for Erwin Koeman’s Red Warriors, who stay second with six points but with a game in hand.

The two previously unbeaten teams met in a battle for group topper rights and it took just three minutes for the hosts to go up. Al Sadd’s Afif slammed home a low pass from 20 year old forward Yusuf Abdurisag from 15 yards to give Felix Sanchez’s team the early advantage.

Oman conjured an equally clear-cut chance almost immediately, but Al Suwaiq striker  Abdulaziz al Miqbali, who had scored a brace in Oman’s previous 3-0 win against Afghanistan, was denied by a terrific save from Qatari goalkeeper Saad al Sheeb, in the seventh minute.

Afif was then involved in another key moment, winning a penalty kick after being fouled by goalkeeper Faiz al Rusheidi, only for Hassan al Haydos to miss the target in the 26th minute.

The second half began with Miqbali finding himself in behind the Qatari defence for a second time in the match, but this time the Omani forward was denied by Tarek Salman, who produced a superbly timed tackle to defuse the dangerous situation.

However, Oman was not to be denied and the equaliser arrived in stunning style in the 63rd minute through Alawi, who utilised his dribbling skills to beat a number of defenders before drilling the ball under Sheeb and into the net from 15 yards.

Almoez Ali then picked out the bottom corner of Rusheidi’s net from the edge of the box in the 72nd minute, with Afif playing his part with a return pass to the star striker.

Oman next hosts Bangladesh on November 14.

In the other Group E game in Kolkata on Tuesday, hosts India fought back from a goal down to salvage a 1-1 draw against Bangladesh .

India, which showed a spirited performance to hold Asian champion Qatar to a goalless draw in Doha last month, needed a late goal by Adil Khan to cancel out Saad Uddin’s first half strike.

Igor Stimac’s side stays fourth in the standings ahead of bottom-placed Bangladesh, which ended a run of two defeats to win a point against India.

The opening goal came three minutes before the break when  Bangladesh shocked the home side through Uddin’s header off a free-kick.

Khan then performed heroics at the other end when he scored with a glancing header at the near post off a corner with two minutes left in the game to salvage a point for India.