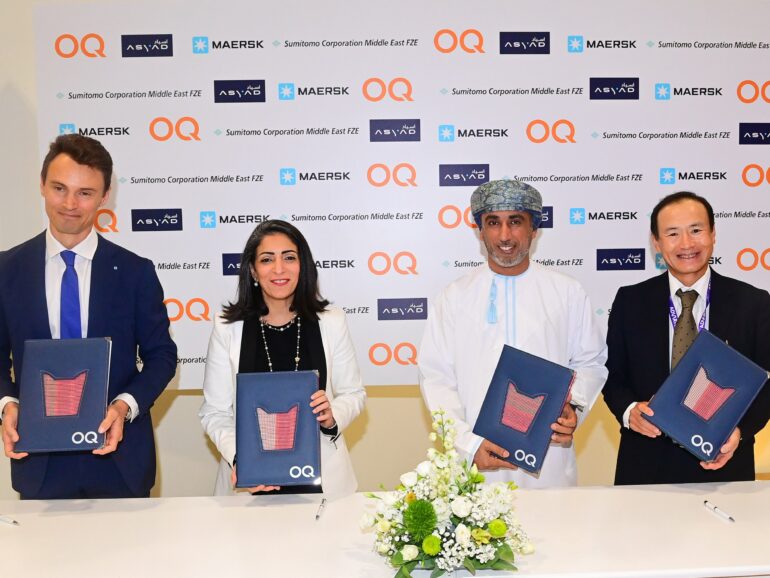 The memorandum – which was signed on the sidelines of the Green Hydrogen Summit Oman 2022 on Monday – aims to discuss the commercial and technical feasibility of producing and supplying green ammonia and green methanol at the ports of Duqm and Salalah for the use in port operations as well as the possibility of exporting them abroad in the future.

In a statement to Oman News Agency, Issam bin Nasser al Shaibani, vice president of sustainability at Asyad Group, said that the feasibility study will place Oman on the global green fuel map.

He explained that the selection of the ports of Duqm and Salalah to supply green ammonia and green methanol came due to the availability of vast lands and the establishment of most green hydrogen-related projects near these ports, which will reduce the cost of transporting green fuel.

OQ’s Alternative Energy Unit also signed a memorandum of understanding (MoU) with Oman-India Fertiliser Company (OMIFCO) to study the feasibility of producing blue ammonia in Sur and its use in OMIFCO’s production operations.

Qassim bin Mohammed al Balushi, director of sustainability and strategic planning at OMIFCO, explained that the MoU came to take advantage of modern technologies in the field of renewable energy and low carbon technologies, in order to reach blue ammonia production at the company.