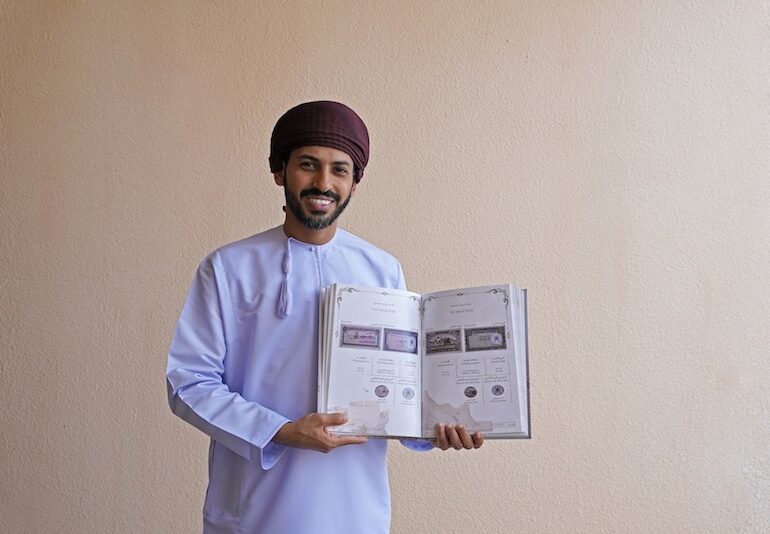 Abdulaziz al Kharusi, a young flight engineer, has let his creative pursuit of currencies take flight with an ambitious attempt to launch a chronicle of Omani banknotes.

The hardbound book – Oman Banknotes (1970 – 2021), published with exclusive images of banknotes and cultural symbols, accompanied by relevant text in Arabic and English, provides interesting insights into the design and relevance of various bank notes that had been floated during the past five decades. The book, to be launched on March 17, also serves as a guide into the history and evolution of the Omani currency in a simple, yet effective, manner.

What began as an act of curiosity in his childhood, when he found an abandoned ‘quarter anna’ (an erstwhile coin minted in India) which sparked his interest into learning about coins and currencies, soon blossomed into a fulfilling hobby for Kharusi. Over the past two decades or so, he has been collecting/procuring Omani banknotes and coins as well as those belonging to other countries in all earnestness, often paying huge sums to procure rare coins and notes.

The book, he admits, is an extension of his intellectual pursuit for learning and collecting Omani banknotes, and though it will be available for a price of RO12, earning a fortune from this collector’s edition is not his goal. Rather, making it see the light of day was a dream come true for Kharusi who has a few more ideas on the same theme up his sleeve.

“Collecting currencies – banknotes and coins – is my hobby and I have done around 62 exhibitions of these in Oman and different countries in the region in the past few years,” says Kharusi who has also received a couple of awards for his collection – the result of painstaking efforts, visiting museums and collectors as well as conducting relevant research.

The book features only Omani banknotes and Kharusi conducted extensive research as well as procured permissions from the relevant ministries as well as the Central Bank of Oman to authenticate its contents.

The images of the various denominations of banknotes used in Oman over the past 50 years bears varied symbols of Oman cultural heritage a well as portraits of three Sultans of Oman – late Sultan Said bin Taimur, late Sultan Qaboos bin Said and the current ruler of Oman, His Majesty Sultan Haitham bin Tarik.

The various sections in the book include chapters on the features of Oman banknotes, Sultans of Oman who issued banknotes, financial institutions where currencies get issued, signatures, symbols and their significance – forts and castles, handicrafts, crafts, Islamic architecture, places in Oman, wildlife, modern renaissance symbols, and national symbols, besides a chapter on various issues of banknotes.

“Designing this book on the history of Omani banknotes and the various symbol in them was a beautiful experience and I gained a lot of knowledge from it. The design task took six months – it contained rare inscriptions taken from Omani history. In the design, we relied on the symbols taken from six issues of Omani banknotes,” says Ahlam Saif al Hasani, designer of the book.