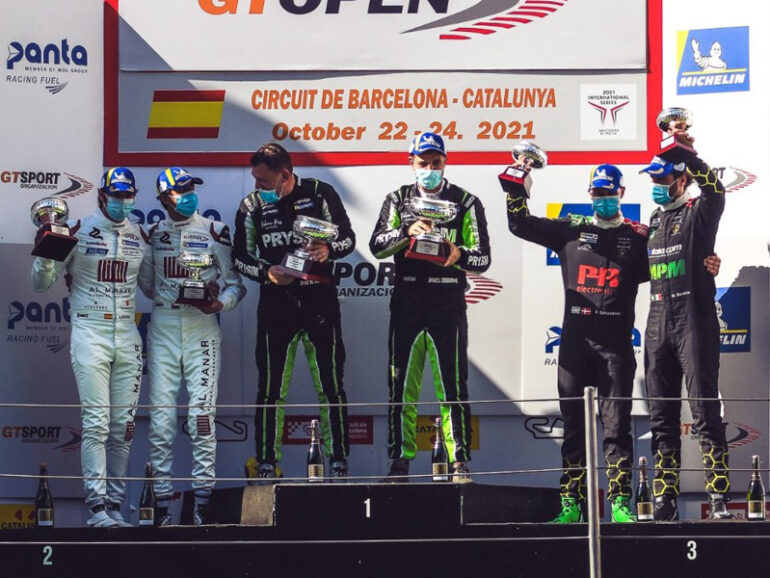 Muscat – A debut season ended on a high with a sizzling run for Oman’s Al Faisal al Zubair, and his Spanish teammate Andy Soucek, at the Circuit de Barcelona-Catalunya in Barcelona, Spain, on Sunday as the pair narrowly missed a win in the last race of the seventh and final round of the 2021 International GT Open.

The Lechner Racing Porsche 911 GT3 R duo ended up a close second to Inception Racing of Nick Moss and Joe Osborne on a warm afternoon and ahead of newly-crowned 2021 champions Michele Beretta-Frederik Schandorff of VSR Lamborghini.

The runner-up finish was enough for Al Faisal to claim an overall third-place in the championship driver’s standings behind Soucek. The Spanish driver had gone into the final race on Sunday knowing that he had secured an overall vice-champion while Al Faisal’s third place finish was more to do with the Omani driver missing the round in July at the Hungaroring circuit in Hungary due to illness.

Speaking on Sunday after his overall podium finish in the highly-competitive endurance racing series, Al Faisal remarked, “What a way to end the season!. Having started the final race at tenth place and to fight back with a chance to even win the race underlines our team’s credentials. It was an amazing
performance, given the disappointing qualifying we had.

“To reach second from tenth was just a great feeling. I am so proud of the whole team and the project we created this year.”

The 23 year old was satisfied with the performance throughout the season and said, “I don’t think anyone expected us to come and fight for a win at every race meeting.

“To finish overall third, as I missed a round, and Andy taking the runner-up honours, I couldn’t have asked for more.”

On Sunday, the pair climbed through the field from a starting position of tenth on the grid to secure the runner-up position just 0.686 seconds behind pole winners, Moss and Osborne.

Jim Pla and Thomas Drouet finished fourth in a Mercedes AMG and Belgium’s Baptiste Moulin and Japan’s Yuki Nemoto rounded off the top-five.
Al Faisal added, “I am very happy with the season and could not thank my family enough and the whole team. “I am just looking forward to announcing my plans for next year.”

Soucek had qualified the Lechner Porsche down in tenth for the last of the season’s races with a best time of 1min 44.184sec during an eight-lap stint. Moss and Osborne claimed pole with a tour of 1min 43.085sec in their McLaren 720 S GT3 and Pla and Drouet were second.