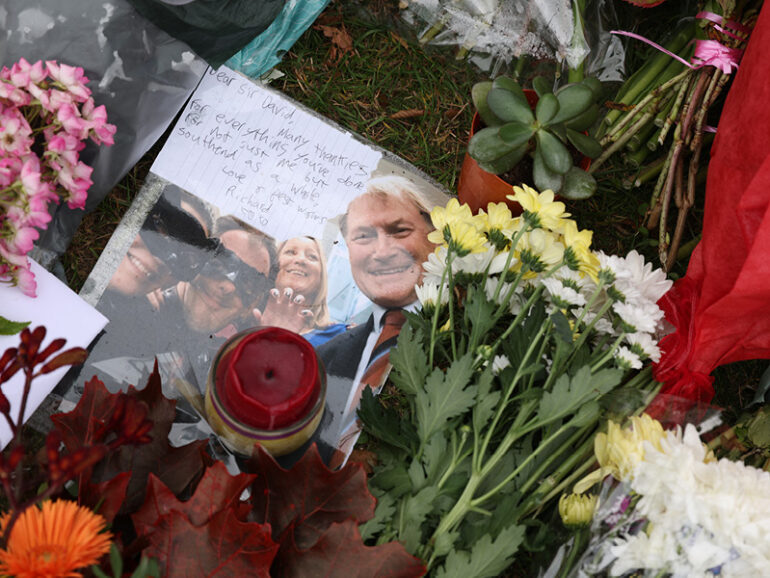 Leigh-on-Sea, UK – Britain counter-terrorism police on Sunday probed the murder of a British MP as reports said the suspected attacker had been referred to an official de-radicalisation programme.

Veteran Conservative lawmaker David Amess (69) was stabbed to death on Friday as he met voters at a church in Leigh-on-Sea, east of London, in the second such attack on an MP in just over five years.

Police have declared the crime a terrorist incident and said they are investigating “a potential motivation linked to Islamist extremism”.

They have detained a 25-year-old man under the Terrorism Act, which allowed them to extend his detention for questioning until Friday.

He has not been charged.

The investigation is being led by Scotland Yard’s Counter Terrorism Command.

Detectives said late Saturday they were searching three addresses in the London area in a “fast-paced investigation”.

On Sunday, police stood on guard in front of a three-storey house in a quiet street in the north London district of Kentish Town.

They had set up a tent in the front garden and blue-gloved officers were working inside, an AFP journalist saw.

A woman living nearby told AFP she did not think the suspect lived there.

“We know the family, they are lovely people. They have three sons but they are older” (than the suspect), said the woman, who did not give her name.

British media, citing unnamed official sources, identified the suspect as Ali Harbi Ali, a British national of Somali descent who had been referred to Prevent, the official counter-terrorist scheme for those thought to be at risk of radicalisation.

Ali was believed not to have spent long on the programme, which is voluntary, and was never formally a “subject of interest” to MI5, the domestic security agency, the BBC said.

Police and security services believe he acted alone and was ‘self-radicalised’, The Sunday Times said, while adding he may have been inspired by Al Shabaab, Al Qaeda-linked Islamists in Somalia.

Ali’s father, named as Harbi Ali Kullane and said to be a former advisor to the prime minister of Somalia, confirmed to The Sunday Times that his son was in custody, adding: “I’m feeling very traumatised.”

Interior minister Priti Patel said the Prevent programme that reportedly had the suspect in its sights is currently under independent review.

“We want to ensure it (the Prevent programme) is fit for purpose, robust, doing the right thing, but importantly, learning lessons,” the minister told Sky News.

Mourners continued to heap flowers beside the police tape sealing off the Methodist church where Amess, the local MP since 1997, was killed.

Among them was Les Thorington, a retired local resident and military veteran bedecked in medals.
“Shocked. Couldn’t believe it,” he said, adding of the suspected attacker: “That man should never have been on the street.”

The House of Commons will hold prayers and a minute’s silence on Monday, after which MPs will pay tribute to Amess and attend a religious service of remembrance.

Patel said MPs’ security would be beefed up as the attack spread fear among lawmakers, five years after the similar killing of Labour MP Jo Cox in the febrile run-up to the Brexit referendum.

Patel has ordered a review of security measures for parliamentarians and told Sky News “we need to close any gaps” in security provision for MPs, whose work includes regular meetings with constituents, called “surgeries”.

She said police and parliamentary authorities were implementing “immediate changes and measures that are actively being put in place, and discussed with Mps”.

These included MPs sharing information on their whereabouts at all times with police.
Police guarding of surgeries was also “in consideration right now”, she added.

According to The Sunday Telegraph uniformed police were already guarding some surgeries following the attack, which prompted calls from some MPs for a pause in face-to-face meetings.

The government stepped up security for MPs following the 2016 murder of Cox, a 41-year-old lawmaker, who was shot and stabbed outside her constituency meeting near Leeds, northern England.

House of Commons Speaker Lindsay Hoyle wrote in The Observer that “we need to take stock” and review whether security measures introduced after Cox’s murder are “adequate to safeguard members, staff and constituents, especially during surgeries”.