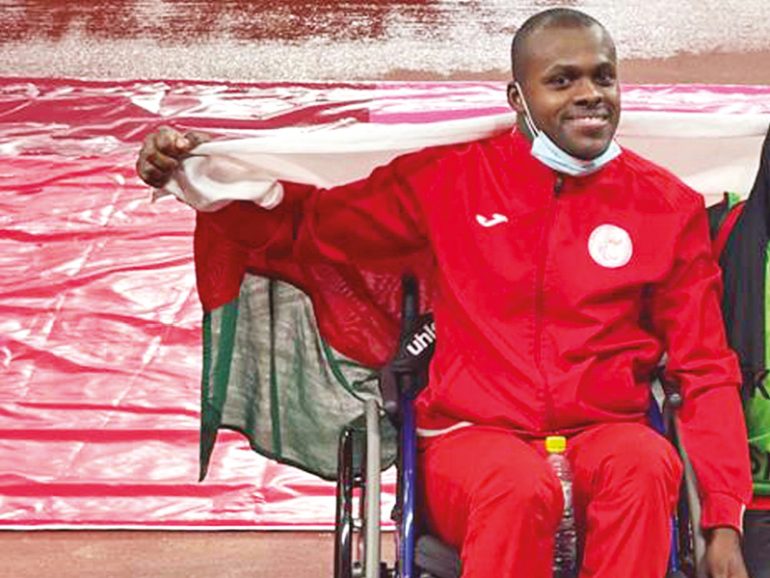 Oman’s history at the Olympic Games, the Paralympic Games and the Youth Olympic Games is almost like a clean sheet of paper with no individual medal glory at any of these Games since they made their debut at the 1984 Los Angeles Olympics.

But, it all ended on Tuesday at the Olympic Stadium in Tokyo, Japan, when Oman’s Mohammed al Mashaykhi scripted a new chapter in the sport’s history by becoming the first Omani individual Games medallist.

It was a terrific Tuesday for Oman as the 30-year-old Mashaykhi, Oman’s flag bearer at the opening ceremony of the Tokyo 2020 Paralaympic Games, claimed a bronze medal in the men’s shot put – F32 event with a throw of 10.84m, his personal best. China’s Li Liu set a world record to bag the gold (12.97m) while Russian Aleksei Churkin settled for the silver (11.31m).

Mashaykhi’s first throw of 10.84m in his six attempts fetched him the historic bronze among the nine finalists.

Mashaykhi is coached by long-time Tunisia’s Sonia Mustafa (since 2016).

In fact, it was Sonia’s consistent belief in him that saw the 30-year-old Parathlete return to active competitive sports following disappointment at the 2016 Rio Paralympic Games.

For Oman, this is the second ever medal at any Olympics with the first being a silver won by rider Sultan al Touqi in the mixed team (Australia/Asia) show jumping event at the 2010 Youth Olympic Games in Singapore.

Sultan was just 17 when he won the maiden medal for Oman.

But Mashaykhi’s bronze exploits ended a 37-year drought for the sultanate of an individual medal at any Olympic Games.

The Paralympian previously did Oman proud when he won the silver in the shot put – F32 at the World Para Athletics Championships in London in 2017. That was the first time that an Omani Para athlete had won a medal at the worlds.

An injury in late 2019 left him out of action for six months but he returned to action in style at an international meet in Morocco in February 2020, with two gold medals.

In his remarks after the historic bronze for Oman in Tokyo, a jubilant Oman Paralympic Committee (OPC) chairman Mansour al Tauqi said, “It is a historic achievement by our hero Mohammed. It is a dream come true for him and we are all proud of him.

“We had a goal of winning a medal at the Tokyo Paralympic Games and we have reached our goal.”

Oman have fielded a three-member team for the Tokyo Paralympic Games.

If he manages to advance, the final is scheduled on Saturday.

Iman ended her campaign on Wednesday with a last-place finish among 11 competitors in the women’s shot put – F34 with a distance of 5.17m.

An Asian Para Games gold medallist, Mashaykhi has cerebral palsy impairment but the Para athlete is the new poster boy as he has achieved one of biggest moments in Oman’s sports history by his sheer determination and grit.