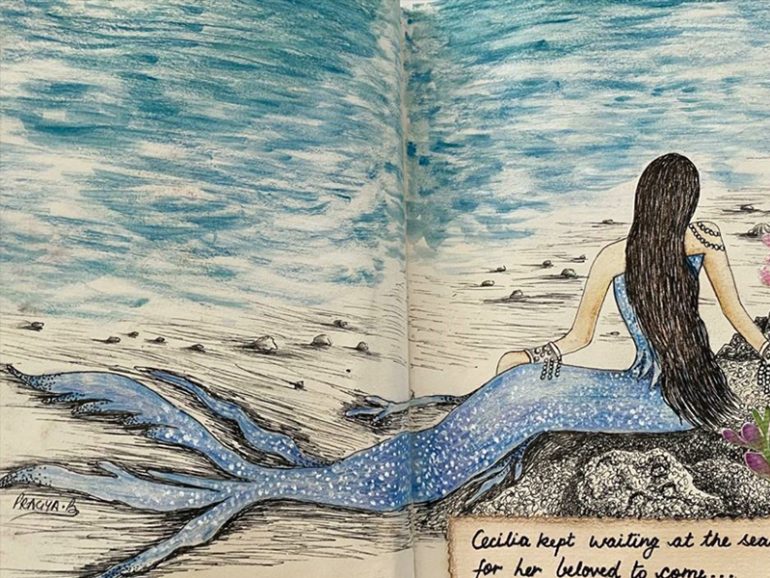 From colourful seashells on the shore to a reclining mermaid, from a deadly serpent to an eerie haunted house, a unique collection of sketches by Indian artists in Oman now adorn a virtual exhibition which opened yesterday.

The exhibition is the seventh offering by Rangrez, a group of Indian artists in Oman, which is keeping the flame of art burning bright despite the spate of lockdowns and movement bans that hampers regular physical art displays.

The theme of this exhibition is based on an old indoor word game – Name Place Animal Thing – wherein artists were required to submit a minimum of seven sets of sketches done in a sketchbook. This exhibition by the Indian Social Club art wing is part of its 75 weeks of celebration of the 75th anniversary of India’s Independence.

Sushmita Gupta, founder-member of Rangrez, said, “We felt extremely thrilled with the theme set for us by Debjani Bhardwaj (the curator), who is one of the best known artists of Indian origin in Oman. I, however,  guided the participating artists of Rangrez by assisting them in choosing concepts if they felt overwhelmed with many different ideas and troubleshooting on mediums and styles to make their submissions stronger.”

Debjani disclosed, “Name Place Animal Thing was a fun mind game many of us played as children in which the players had to list unique names, places, animals and things as per alphabetical prompts given to them. There are infinite thematic possibilities for turning this game into art books based on current world events or philosophical, geographical, literature-based, imaginary, historical or nostalgic thoughts, which inspired me to choose it as a theme for this exhibition.”

Every participating artist was given an A5 sized notebook and they had to fill its pages depending upon the approach they chose for making their books, using their own set of tools, be it pencils, colour pencils, water-colours, acrylic paints, inks, paper-cutting or collages, she said, adding, “I was interested to see how different artists would respond to this given theme and given book so as to transform it in their individual ways.

The interesting part about this project was that the participants were not aware of what the other participating artists were making. So,there was a degree of suspense, curiosity and excitement surrounding how other artists had interpreted this rather open-ended theme.

Every member that participated admitted that they were totally drawn into the challenge set for them. Around 28 sketchbooks got prepared by 28 artists – each unique in its own approach.

Here’s how some of the participating artists of this exhibition described their work:

I feel a window tells us a story, whether we are looking outside through it or looking inward. The process was like an adventure and I truly enjoyed. I had an idea of creating a combination of animated characters and calligraphy. I used loose colour washes and some texturising with coloured pencils. This project trained my mind to keep creating multiple ideas on a single theme.

I created a travelogue for little children. This book is dedicated to my granddaughter, and I recorded her favourite places in Muscat my book. I used the techniques of pen and ink and water-colours. The part that I enjoyed most was the composition and writing of this little book. I realised that I had a lot of patience when it meant doing something I like. My other ideas were ‘Around the world in 80 days’, ‘Alice in Wonderland’ and ‘Fairy tales’.

A Tale of Love and Hatred

I wrote an emotional story revolving around mythical fantasy characters. The other ideas I contemplated were ‘Culture of Oman’, ‘Alice in wonderland’ and ‘Indian heritage’. The challenges I faced were to first create my own original characters, then maintaining uniformity and harmony throughout such diverse art frames while telling a story using so many illustrations. I used techniques like sketching with water-colours, pen, pencil colours and paper cut-outs. I used storytelling through multiple, continuous frames.