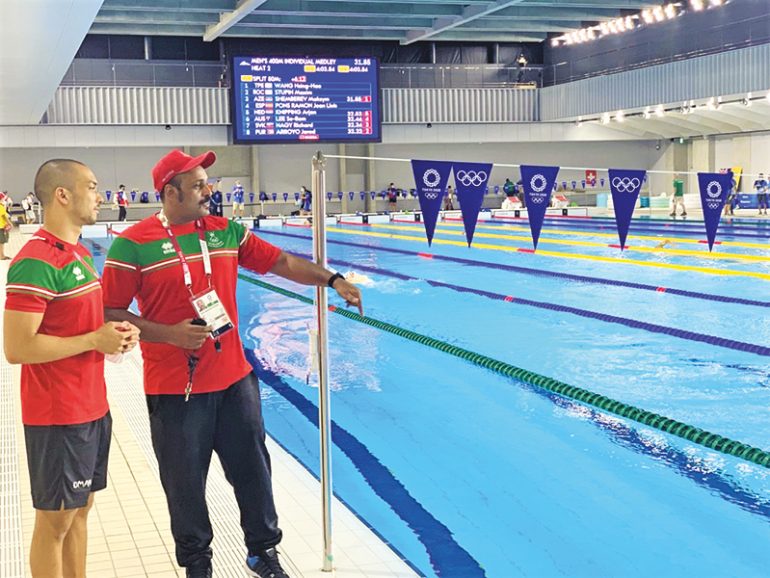 On Tuesday, when the starting gun goes off at the Tokyo Aquatics Centre in Tokyo, Japan, at 2.07pm (Oman time), a dream will come true for Oman’s talented swimmer Issa al Adawi, who will be making his debut at the Olympic Games in the 100m freestyle race.

It will be a culmination of a decade long journey for 22 year old Adawi, that saw him go through rigorous training sessions and compete in hundreds of competitions.

His talent saw him dominate in age-group competitions at domestic and at Gulf events and it was not long before the Oman Swimming Association (OSA) realised that they had a swimmer who could do the nation proud.

As a teenager, Oman’s Issa al Adawi, dreamt of participating at the world’s biggest sporting stage – Tokyo Olympics – and his pursuit to achieve was strengthened by his determination and desire to excel.

And Adawi’s love for Japan is no surprise as his mother, Hiroko Jimbo, hails from Kanagawa Prefecture, south of Tokyo.

For the past three years, Adawi, with the support of the Oman Olympic Committee (OOC) and the OSA, has been training after receiving a scholarship at the Chukyo University in Nagoya, Japan, under the supervision of his Japanese coach Kusanagi Kenta.

With his career-best timing of 51.69s, Adawi is placed in Heat No 3 in lane one, along with seven other competitors. A total of nine heats are scheduled in the 100m freestyle on Tuesday with 16 of the 72 swimmers in fray advancing to the next round.

Ahead of his debut, Adawi said, “My aim is to give my best. This is the biggest sporting stage and I am proud to represent Oman here. It was my dream to take part in Olympics and what better stage and place than in Japan, the country of my mother’s birth.”

Adawi’s mother, Hiroko, hails from a small seaside town of Zushi, next to medieval Samurai capital of Kamakura in Kanagawa Prefecture.

Among the eight swimmers in Heat 3, Adawi’s timing is seventh best. “For me, to improve my personal best would be an achievement. I am confident of doing it and I am looking forward to the race,” he said on Monday.

Training for the Games was hampered for him as COVID-19 restrictions caused disruptions but Adawi is focused and is set to make a splash, literally, for Oman, on Tuesday.

Prior to the Olympics, Adawi had participated at the FINA World Championships in Gwangju, South Korea, in 2019 and the Asian Games in Indonesia in 2018.

Adawi was also one of Oman’s participant at the 2018 Youth Olympic Games in Buenos Aires, Argentina.

Earlier on Friday, Adawi carried the sultanate’s flag at the opening ceremony and said ‘it was a memory that will last forever’.

Kishry wished Adawi the very best and congratulated him on making his debut. He said, “We are confident that Adawi will represent the sultanate in an honourable manner and achieve his personal best.”

Lifter Khanjari to compete on July 31

Oman’s other Olympic Games debutant, Amur al Khanjari, 20, will be competing in the 81kg class of the weightlifting event, on July 31. Experienced marksman Hamed al Khatri, who will be taking part in his second Games, will be in action on August 2 in the 50m rifle three position men’s qualification round.

Oman’s only women participant Mazoon al Alawi will make her second Olympic appearance when she runs in the 100m round one heat on July 30.

The sultanate’s fastest sprinter, Barakat al Harthi, will feature in the 100m heat on July 31. For Harthi, this will be his third consecutive Olympic Games, equalling the record of legendary Omani athlete, Mohammed al Malki, who too, took part in three successive Games (1984, 1988 and 1992).