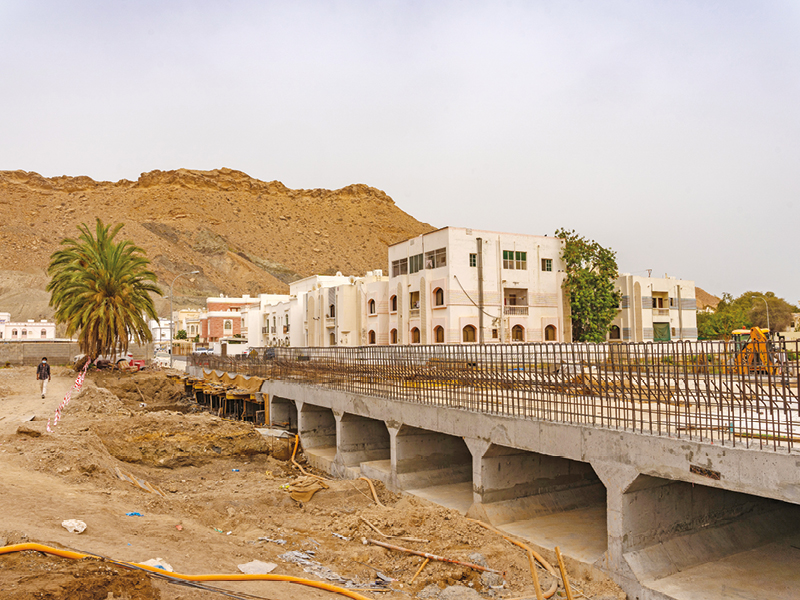 A long-held demand of Darsait residents is finally being met. Their homes can only be accessed by a road that turns left and crosses a wadi just before Indian School Darsait, Senior Section. Even a light rain affected their lives as the wadi overflowed severing road connectivity with their neighbourhood.

Muscat Municipality is currently constructing a bridge over the Wadi al Kabir stream in Darsait which is likely to be completed soon.

Once built, the bridge will give a sense of safety and a reason to many residents of this neighbourhood to revert plans to move out of it. The swollen wadi often disrupted their lives leaving them stranded on either side.

Residents, pedestrians in particular, complained of the situation because in the absence of a permanent bridge, crossing the wadi posed a problem even when it didn’t rain as water flows down the wadi all year round.

Muscat Daily reported the residents’ grievances in several past editions, and on February 25, 2020, following a Muscat Municipality team’s visit to the area, an official was quoted as saying, “Hopefully, a bridge with box culverts will come up soon.”

Sachin Kumar, who has lived in the area for the last ten years, said, “Thanks to Muscat Daily for reporting and bringing the problems faced by Darsait residents to the authorities’ attention to take action.”

He further said, “My work keeps me out till late hours and some times, I get stuck due to the overflowing wadi and reach home at 3am.”

For Lamya al Lawati, another resident of the area, waiting for hours for the level of water in the wadi to subside didn’t bother her as much as the frightful prospect of watching cars entering the flowing wadi go adrift. “I advised approaching cars not to enter the wadi.”

Lamya also worried about the neighbourhood children playing in the flooded wadi.

“It is risky for kids to get into any wadi without understanding the dangers of water current. I feel safe and happy seeing the bridge being built.”

The unpredictability of the situation compounded the problem for Rajeev Puttan Phurayil. He narrated an incident one evening that quickly spiralled out of control. “We went for weekly shopping to the nearby hypermarket. There were no rains in Darsait. But when we returned around 9pm, the wadi was overflowing due to a drizzle in Wadi Kabir. Our children waited alone at home. It’s such a relief to see the bridge being built now.”

While the vehicular bridge will come as relief to most in the neighbourhood, Jaikish Pavithran, president of the Management Committee of Indian School Darsait, said a pedestrian bridge over the wadi is also needed to help residents and school students.

“The flowing wadi is a big a problem for students and staff who commute between the junior and senior school buildings, as these are on either side of the wadi. We make a makeshift walking bridge to help our students and staff cross, but whenever it rains, it gets washed away. A pedestrian bridge is a long-term solution. It will help our school and residents too.”

“A stream of water flows in the wadi throughout the year and our cars begin to rust due to frequent exposure. We use our cars to cross the wadi at least twice a day. While maintenance cost increases, it reduces the value of our cars,” Lamya said.