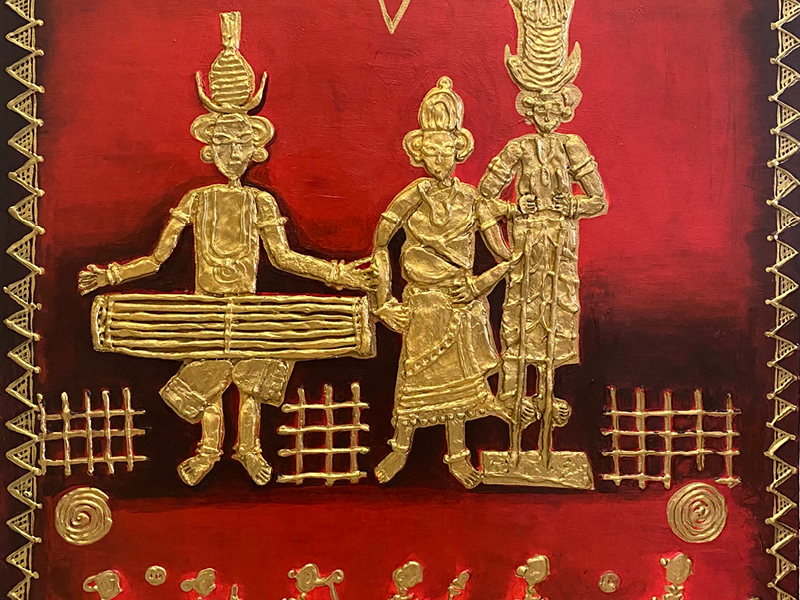 Rangrez, the artist group of the Indian Social Club, is back with its virual art exhibition for the month of March. Opening on March 25, this exhibition called ‘Lok Kala’ provides a comprehensive window to the diverse folk arts of India, and is seen to be one of the most colourful artistic initiatives in Oman till date.

Founding member of Rangrez, Sushmita Gupta said, “The heart of India still beats true in the rural mountains, plains, forests and river banks, The techie skills thrive in urban scapes but ‘jugaad’ (tricks to enhance efficiency) comes with an Indian DNA, no matter which part of the country the Indian hails from. Folk art in India is as diverse as its people and cultures. It is vibrant. It is living. It tells tales of creation, destruction and everything in between.”

The current exhibition has been visualised and curated by Shalini Kartik, who is herself an accomplished artist with a special dedication to rural art forms. “We, at Rangrez, salute her tremendous efforts and dedication towards researching each of the different styles from remote corners of India,” Gupta added.

Kartik, a resident in Oman for over two decades, uses a variety of media to reflect moods and depict the complexities of her subject with vibrant colours. She is proficient in oil, mixed media and also creates craft work that enhances any home décor. Her paintings are often steeped in culture and inspired by tradition. Her repertoire includes a variety of Indian Folk-art forms, making her an ideal choice for this exhibition.

“Cure, in Latin, means to take care and as the custodian of ‘Lok Kala’, it has been my responsibility to present to the audience beautiful pieces of Indian Folk art that will not only enhance their visual pleasure but also take them on a journey to the different corners of our country and acquaint them with India’s rich and varied folk art and culture,” Kartik told Muscat Daily, adding, “For this visual treat, weeks of research has gone into familiarising with origins of the forms and their representations. We have tried to showcase 34 different folk-art forms from India in over 43 paintings done by 39 artists.”

The various art forms have been divided into five regional categories – central, eastern, northern, southern and western. Reproduced below are the artworks representing central and eastern India. (The other three categories will be carried next Sunday)

Dhokra art is essentially stunning metal figurines fashioned from bronze and copper-based alloys using a ‘lost wax casting.’ There are several processes involved in the making of Dhokla art and could take up to a month or two to be created.

I chose Dhokra art as I love the linear figures with their imperfect shapes and non-realistic representations. I’m also fascinated by how the metallic effect goes hand in hand with the extensive use of line used for decoration and embellishment.

Gond art is a distinct art form practiced by the largest tribe in India. A prominent feature of this style is the use of line work. These lines create movement, together with the dots and dashes a greater sense of movement and detail is achieved.

An effort has been made by me to find movement in the lines and dots, to achieve this I have overlapped lines and dots. Without losing the traditional subject and design I’ve tried to make it contemporary by my choice of colours. I really did enjoy doing this work and found it very meditative.

Pithora art is a highly enriched folk-art culture of the Rathwas of Gujarat. The painting is done on the 3 walls usually in the Ofari or porch of the house at the entrance. The motifs comprise of the community mythological elements like Pithora baba, Pithora rani, Raja Bhoj with his elephant, Nagdevta etc. Pithora highlights the components of the tribal ecosystem with pictures of their day-to-day activities, biodiversity, men and women in a myriad of colours.

It quintessentially communicates the essence of the lives of the Rathwas. Pithora fascinated me because of its vibrance and allowed me to play with colours and do a little mischief with the child inside me.

Originated in 19th Century Kolkata, Kalighat was traditionally created by artisans from nearby villages called patuas. The paintings were simple with few strokes and limited colour palette. These served as cheap souvenirs, for foreigners to take home. Over the years, it has attained the importance of emerging as a school of art and still living and evolving.

I veered towards it because of my many main reasons. Firstly, my organic affinity towards my roots in Bengal. Secondly, there is a touch of humour to these paintings. Thirdly, the narrative of some paintings break the patriarchal boundaries even though they are from the 19th century. Lastly, they tell tales of everyday life, as of mythology, in a simplistic style.

Madhubani is a folk art from Mithila Region of Bihar. It is believed this art form came into place when King Janaka wanted to capture his daughter Sita’s marriage to Lord Rama for eternity. This form uses natural dyes and pigments and twigs and depicts rituals, stories from mythology and nature. There are 5 forms – Bharni, Kachni, Godhna, Tantrik and Kohbar. It is characterised by its eye-catching geometrical patterns. There is ritual content for particular occasions, such as birth or marriage, and festivals.

I have always been enamored by the simplicity and beauty of the folk-art forms. They are rooted in culture and nature of the region they belong to. Mahbubani uses simplest of designs and motifs telling stories about mythology and nature, they colourful and yet the spaces left uncolored enhances the beauty of the painting.  The beauty lies in its simplicity, which draws me to this art form.

Santhal painting is a creative expression of the Santhal tribe revolving around harvest, rituals, family life. The Santhal painting shows childlike simplicity in depiction of birds, humans, animals. The paintings often show love and togetherness between humans as well as between humans and animals. I was always interested in colours and Santhal paintings are made in multiple colours and it also comprises of leafy patterns in foreground with simple depictions of birds, animals and humans and it interests me for I love nature. The art is made with childlike simplicity and it is about love and togetherness of humans with nature. Hence, by choosing this art, I am giving my bit of contribution to promote love and togetherness.

Saura Tribal painting is a style of wall mural paintings. The art form is made on the red or brown clay walls of the home with natural dyes made out of rice, white stone, and flower and leaf extracts using a brush that is made of tender bamboo. The figures in the art form are recurring motifs and symbols such as people engaged in various activities, sun, tree of life, birds, animals, huts, cattle etc. deeply connected with nature and simplistic depiction of everyday village life.

Tribal art has always fascinated me. It looks simple but illustrates a deep connection between nature and humans. I chose the famous Saura art as it is rich with symbolism and meaning and its story needed to be told.