Searching for snakes in Oman 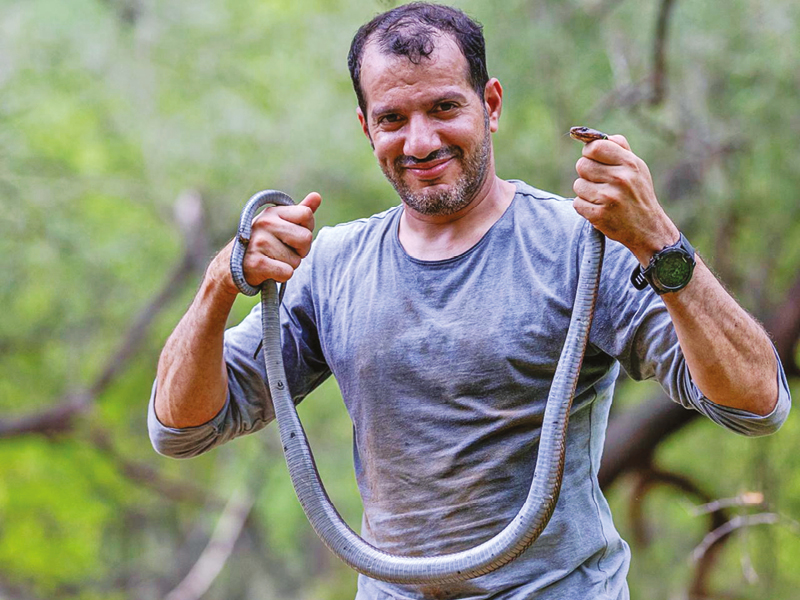 To document Oman’s wildlife, snakes in particular, Ahmed al Busaidi and his friend Ahmed al Rahbi have made a short film on snakes found in the sultanate. The film Searching for Snakes was shot in one day.

Speaking to Muscat Daily, Busaidi, a snake and wildlife specialist at the Natural and Medical Sciences Research Centre at University of Nizwa, informed that the film was shot on August 18, in the wilayat of Manah in Dakhliyah governorate, Wadi al Maiden in Birkat al Mouz in the wilayat of Nizwa, and Jebel Akhdar.

Through the documentation of three species of snakes, Searching for Snakes addresses the significance of wildlife, especially the role of snakes in their natural habitat.

“Snakes are an important part of the environment in Oman, and there are both poisonous and non-poisonous species. Our movie is focused on three species  – the Wadi Racer, Omani Carpet viper and Saw-scaled viper.

The Wadi Racer (Platyceps rhodorachis) is a non-venomous species that grows to 60cm to 70cm in length. The two other snakes filmed are venomous vipers – the Saw-scaled viper (Echis carinatus) and Carpet viper (Echis omanesis). Full-grown adult specimen of these species grow to 35-45cm and 45-50cm respectively.

“One hundred and one reptilian species have been recorded in Oman so far. Of these, 22 are snakes,” said Busaidi.

Most snake species indigenous to Oman are found in Dakhliyah, Salalah and the Batinah region. Of these, nine are venomous.

“The film aims to spread awareness to preserve the natural environment and help adventurous citizens and residents identify the different species of snakes found in their natural habitat in Oman,” he said, adding that they had to search hard before finding a Carpet viper to film.

“We went to Jebel Akhdar and searched in one of the valleys for long before we found a specimen. This species’ habitat in the Al Hajar Mountains stretches from Musandam to South Sharqiyah.”

The film has more than 59,500 views on Rahbi’s YouTube channel that showcases the valleys, mountains and mountain villages of Oman. With 3,000 subscribers, the channel also promotes adventure tourism.

Busaidi, who is also an adventurer, has visited many sites in Dhofar to catch snakes which he hands over to the Natural and Medical Sciences Research Centre to conduct studies.

For snakebites, Busaidi recommends going to a hospital immediately. Snakebite victims must avoid putting pressure on the bite wound.

“If you are bitten by a snake, do not be nervous. Stay calm and move away from the site quietly. If possible, see the snake to know its pattern and colour. It’ll help the doctor decide the treatment. Do not attempt to kill the snake as that might agitate the reptile further and prompt it to attack in self-defence,” Busaidi said.

Busaidi is also part of a team at the university that studies characteristics of snake venom and using their properties to kill cancerous cells.

Snake venom is said to have the highest toxicity potential which makes it an option in the development of anticancer agents. Worldwide, several researches have been conducted on the action of snake venom on tumour cells, though conclusive evidence is awaited.

Snake venom is a complex mixture of enzymes, peptides, carbohydrates, minerals and proteins of low molecular mass. Studies indicate that components of snake venom can not only be used in the treatment of cancer but also other conditions like arthritis, thrombosis, multiple sclerosis, pain, neuromuscular disorders, blood and cardiovascular disorders, infections and inflammatory diseases.

To see the film, go to https://www.youtube.com/watch?v=L4kIFOQrTiQ&t=500s