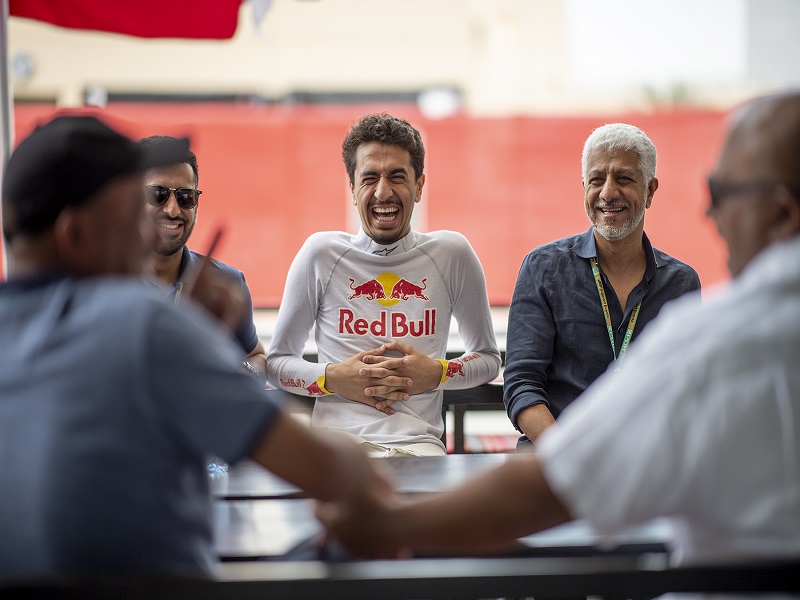 First wins, first title triumphs give sportspersons a feeling like first love. The sweet memories are etched forever in the minds and hearts of those who accomplish it across the world.

And the joy is no different for Omani motor sports hero Al Faisal al Zubair. It has now been just over two years since the then 19 year old claimed his maiden championship title triumph in the 2017-18 Porsche GT3 Cup Challenge Middle East at the Formula One Sakhir International Circuit in Bahrain.

Now, 22, the talented racer, still remembers vividly the details of his podium celebrations, though he has bid goodbye to the Porsche circuit series last year and moved to endurance racing.

In his remarks to Muscat Daily on Tuesday, Al Faisal said, “It was a terrific moment. The benchmark set on that day has led me to many more victories but the first title is definitely the highlight of my young motor sports career. And holding aloft the championship trophy was huge as I achieved it at the F1 venue in the presence of a large crowd.”

It was April 18, 2018 when Al Faisal captured his second race win in a row, having won the 11th and penultimate round too, a day earlier, to crown himself as the first Omani champion of the competitive series.

It was only the second year of his participation and to clinch the championship title, run over 12 rounds, underscored his talent with the Omani teen claiming four race wins and ten podium finishes that season.

Al Faisal impressed early with his maiden win of the 2017-18 season coming in the third race in Dubai on December 8, 2017.

Earlier, in his debut 2016-17 season, Al Faisal recorded his maiden race win, also in Bahrain, on April 15, 2017, an achievement, he still feels proud to mention.

“Yes, my first race win. It was one of the happiest moments of my life. It is very special to me as I was racing as a Red Bull-backed driver,” recalled Al Faisal.

The debut season had Al Faisal claim three podium finishes and set him up for a sensational second year and the Omani didn’t disappoint.

“The first championship title was a result of hardwork and doing it in the Porsche GT3 Cup Challenge series, which is the strongest competition in the region, was massive. I had won races by then but those were few. To claim the championship title underlined my consistency,” said Al Faisal.

After the maiden title, Walter Lechner, founder of the Porsche ME series, had told Muscat Daily during an interview in Muscat that ‘Al Faisal is a great representative of the region and has all the abilities to make it big.’

Al Faisal kept the words and trust shown by Lechner as he became the first driver in the championship’s ten-year history to win back-to-back titles in April last year. The Omani did it in style, winning eight of the 12 rounds, bagging seven pole positions and 13 podiums.

A total of whopping 363 points that included six race wins in a row, secured Al Faisal’s second title in a row even before the final race.

“To be crowned champion in succession was like a cherry on the cake and proved my first title was not a flash in the pan. To add lustre to the title was the fact that I became the only driver to win two titles in a row in the ten-year history of the series,” said Al Faisal.

The Omani, now a UK university student, believed that despite his motor sports career spanning only six years, his move to compete in various championships helped him a lot.

Hailing from a sports-loving family, Al Faisal’s father, Khalid, was the first elected Oman Olympic Committee (OOC) chairman while his uncles have been closely associated with tennis, golf and motor sports. The complete support of his father and others has been instrumental in Al Faisal’s fast-track to many competitions around the world.

He said, “So far, so good as far as my motor sports career has gone. We competed in top races, which had much experienced drivers and I can be proud of putting up a strong show. I gained and learned a lot. To make it to the Porsche Super Cup was another proud moment. All those closely-fought races, delight and disappointments over the past few years have made me a better driver. I hope those lessons learnt will help me do well in the new championship – 24H GT Series- Championship of the Continents (GT3) – where I made my debut this year.

“As of now, there is no news if the series will resume or not. A clearer picture will be known later only.”

Al Faisal competed in only one race with his new team- HTP Winward Motorsport in Mercedes-AMG GT3.

With the current lockdown restrictions in place due to the coronavirus pandemic, Al Faisal does watch a lot of racing videos to spend his time at home and indulges in bit of stimulation on his playstation.

On his future goals, Al Faisal said that his ‘experience in Porsche Middle East and Super Cup would help him in the endurance racing category’ and hopes to win more races and titles in future.

As of now, he is proud and treasures the memories of his first championship title and becoming the first driver to win back-to-back crowns in the Porsche GT3 Cup Challenge Middle East. Achievements, that Oman sports is proud of.