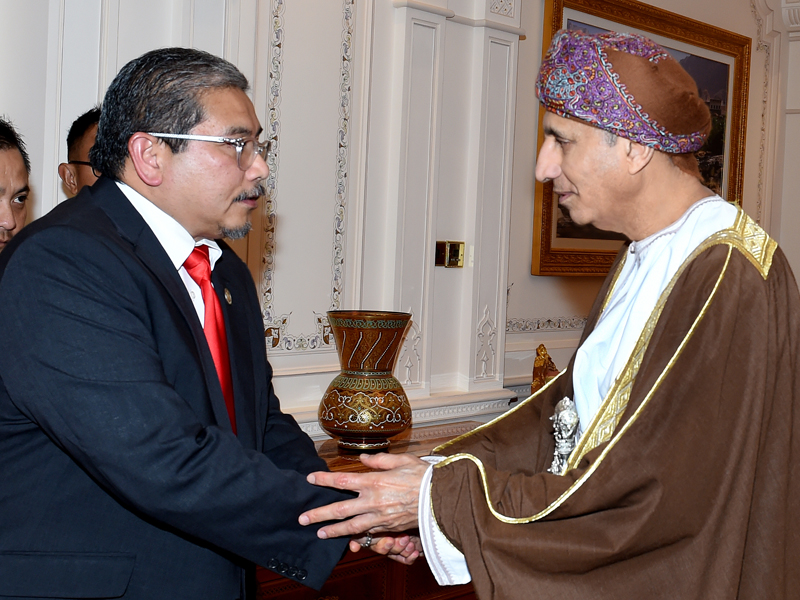 Sayyid Fahd bin Mahmoud al Said, Deputy Prime Minister for the Council of Ministers on Sunday, received Dato Seri Setia Haji Muhammad Yusof, Second Minister of Foreign Affairs and Trade of Brunei Darussalam and Head of the Brunei side in the 19th consultative meeting between Oman and Brunei Darussalam.

The meeting comprehensively reviewed ties of cooperation between the two countries, as well as the keenness to enhance them in many fields.

Sayyid Fahd commended the steps achieved in the same path between the two sides for the interest of the two countries’ friendly people. Current issues and latest developments at the regional and international levels were also reviewed during the meeting.

On his turn, the guest expressed his gratitude and that of his accompanying delegation over this visit due to its positives, in addition to activating the agreements between the two countries.

He affirmed his country’s appreciation of the balanced, wise policy pursued by Oman under the leadership of His Majesty the Sultan, which earned it respect of all.

The meeting was attended by Sayyid Badr bin Hamad al Busaidi, Secretary General in the Ministry of Foreign Affairs.