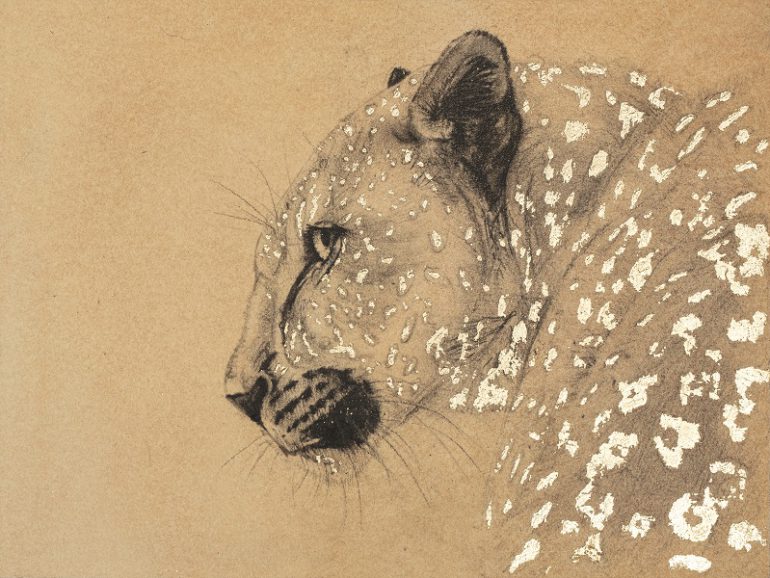 An exhibition titled ‘Wild Oman’ opening on November 4 at the Sayyid Faisal bin Ali Museum – the Natural History Museum – in the Ministry of Heritage and Culture celebrates Omani wildlife through charcoal drawings made by UK-based conservation artist Violet Astor.

Held in association with Environment Society of Oman, ‘Wild Oman’ is open to the public from November 5 to 7, and will move to Bait al Baranda on November 10 where it’ll show till November 30. Divided into four categories – Desert, Mountain, Sea and Sky – ‘Wild Oman’ covers the diverse wildlife of the sultanate in 12 large and 20 small charcoal renderings.

The biggest drawing in the collection is a 68cm X 87cm piece of an Arabian leopard. Violet travels the world to draw endangered species and collaborate with wildlife conservation projects to raise awareness and funds for their survival. Since 2017, when she worked on a tiger and leopard conservation project in India, she has travelled to three other countries collaborating with local and international organisations.

Last February, Violet worked on a project to reintroduce Eastern quolls – a marsupial native to Australia extinct on the mainland since the 1960s – back into the wild.

A month later, she travelled along the northern coast of Papua New Guinea where she was only the second or third white person the indigenous people had seen. Proceeds from her artwork following the trip went to Survival International, a human rights organisation that helps tribal people defend their rights, protect their lands and determine their own futures.

Also in 2018, Violet collaborated in a project in Indonesia to save orangutans threatened by deforestation resulting from loggers clearing up land for palm oil plantations. Violet visited Oman in January this year, when she joined a project undertaken by the Diwan of Royal Court’s Office for Conservation of the Environment in satellite tagging Steppe eagles, followed by a visit to leopard territory with wildlife biologist Dr Andrew Spalton, Adviser for Environmental Affairs in the Diwan of Royal Court.

However, she wasn’t lucky enough to see all of the wildlife with her own eyes. “The leopards are very elusive, and there are only 50-70 of them left in the wild, so I didn’t actually see one. I used images from camera traps to draw the identifying markings of these leopards. The markings of the camera trap images and my drawings are exactly the same,” Violet said.

In keeping with her efforts in conservation, Violet draws on recycled paper from coffee cups and rattles off shocking stats with effect. “Sixteen billion disposable coffee cups are used every year; 6.5mn trees are cut down to make these cups using 4bn gallons of water and enough energy to power 54,000 homes for a year,” she stated. Violet holds talks on the sidelines of her exhibitions in which she elaborates on what people can do to protect their natural environment.

“It’s quite a big battle but some of the changes aren’t as big as they might seem – it’s not asking the impossible of people. It’s being mindful. If everyone makes a small shift, together we can make a big change. “The environment isn’t asking people to change who they are – it’s just making a few little tweaks in their lifestyle.

If everyone was to take a canvas bag for shopping, that alone is going to make a very big change. And it’s not hard to take a reusable coffee mug with you,” Violet said.

Also keeping in line with the cause of conservation, besides using ethically sourced materials, Violet includes natural elements found in the environment of her subjects. In Indonesia, she grated and boiled yellow root to make natural paint for the orange-brown colour of orangutans. In India, she tinted her canvas with masala tea and painted tiger fur using betel nut and turmeric.

“In Oman, I collected soil from Salalah – leopard territory in the Dhofar mountain range – and mixed it with linseed oil to get the colour of the soil on the paper on which I have drawn some of the pieces,” she informed.

A former social worker, Violet’s engagement with art was a twist of fate. She contracted Lyme disease – caused by tick bite – in 2012 on a holiday in Bali. Housebound for three and a half years, art helped her heal. She counts her illness as a blessing in disguise.