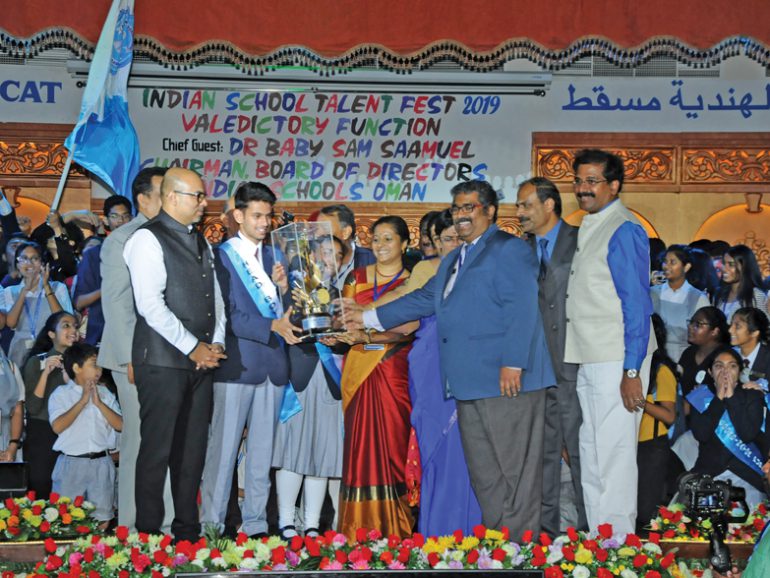 The Board of Directors, Indian Schools in the Sultanate of Oman, hosted the first edition of Indian School Talent Fest – ISTF, an inter-school panorama of cultural events formerly known as Jhankaar Spectrum. The two-day cultural extravaganza was hosted by Indian School Muscat (ISM) on its premises.

ISM was later declared champions. This mammoth event organised by any educational body in the Middle East, showcased 2,000 plus participants and their talents in 27 events held at different venues. Students were also given an opportunity to showcase their unique talents as a non-competitive event.

The event was inaugurated by H E Munu Mahawar, Ambassador of India to the Sultanate of Oman. Dr Baby Sam Saamuel, chairman Board of Directors of Indian Schools in Oman, officials from the Indian Embassy, other members from the board, Ajaykummar J – president Indian School Muscat Management Committee and members of the School Management Committee added grandeur to the inaugural ceremony. Megan Erica D’souza – head girl of Indian School Muscat welcomed the gathering.

The chief guest declared the meet open and hoisted the ISTF flag. Lauding the events at ISM the chief guest said, “I am delighted to be back with Indian School family for yet another mega event. I think it’s becoming a habit for Indian School family to organise events in style. I am happy that this event is also being launched on a very auspicious day when the nation is also celebrating national unity.”

As a gesture of love, appreciation and gratitude, Arwa of XI K presented her artwork to H E Mahawar. The inaugural programme concluded with the vote of thanks proposed by Dhanvi Bharadwaj, the head boy.

The chief guest honoured the prize winning schools with mementoes and certificates. The auditorium reverberated with jubilance as Indian School Muscat lifted the most coveted championship trophy of the ISTF 2019.