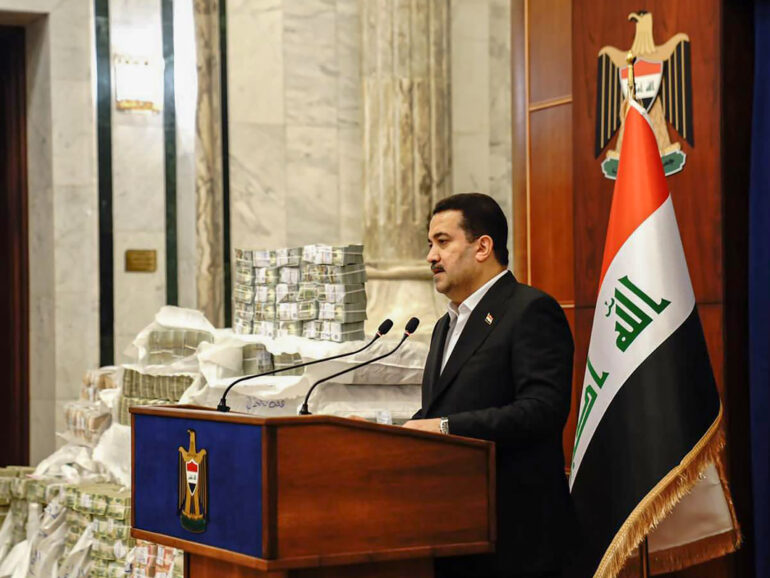 Baghdad, Iraq – Iraq has recovered ‘part’ of US$2.5bn in public funds fraudulently withdrawn from a government account, the prime minister said on Sunday, calling on guilty parties to hand themselves in and return all the money.

Mohammed Shia al-Sudani said a wealthy businessman implicated in the theft from tax authorities had given back US$125mn out of more than US$1bn that he ‘confessed’ to having received.

Businessman Nour Zuhair Jassem will be subject to an assets freeze and released on condition of recovering the remaining funds within two weeks, Sudani added.

The scandal has provoked widespread ire in Iraq, an oil-rich country ravaged by endemic corruption.

According to a document from the country’s tax authority, the colossal sum was allegedly expropriated between September 2021 and August this year through 247 cheques cashed by five enterprises.

The money was subsequently withdrawn from the companies’ accounts, the document showed.

The owners of those accounts – most of whom are on the run – are subject to arrest warrants.

‘The competent authorities have been able to retrieve a first tranche amounting to 182.6bn Iraqi dinars,’ equating to more than US$125mn, Sudani said.

His comments came during a live address, and he was flanked by piles of banknotes stacked in packages.

Jassem was arrested late last month at Baghdad airport when he tried to leave the country on a private jet, authorities said at the time.

The prime minister said the judiciary had reached an agreement with the accused that he return all the money.

Another suspect, who was arrested in Iraq’s autonomous Kurdistan region, is the subject of proceedings to transfer him to Baghdad.

‘We call upon all the suspects subject to arrest warrants in this case to hand themselves in and hand back the stolen funds,’ the prime minister said.

“Arresting the thieves and those who aided them is very important,” Sudani added.

“But the most important thing is the return of the funds. What does it matter if so and so is in prison if the (US$2.5bn) is not in the state’s coffers?”

Tax officials and public bodies are implicated in the scandal, he said, adding that their identity ‘will be revealed at the end of the investigation’.

“We will spare no one,” Sudani vowed.