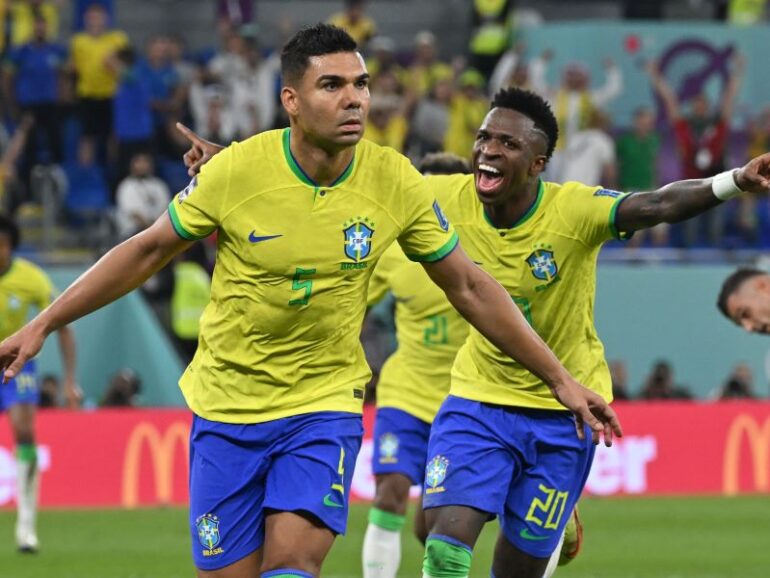 Doha, Qatar – A Brazil side lacking spark without the injured Neymar needed a late strike from Casemiro to edge out Switzerland 1-0 on Monday as the five-time winners secured their place in the World Cup last 16 with one game to spare.

The Brazilians had been frustrated by an obdurate Swiss side at Doha’s Stadium 974 and it looked as if they would have to settle for a point after a Vinicius Junior strike in the second half was disallowed for offside following a VAR check.

But then, with seven minutes remaining, Bruno Guimaraes flicked the ball on to Casemiro just inside the box and the Manchester United midfielder’s volley flew into the net with the help of a slight but significant deflection off Manuel Akanji.

Tite’s side are just the second team to qualify for the last 16 after France and the only side apart from the holders to have won both group matches so far in Qatar.

With six points they will be tempted to rest players for their final Group G game against Cameroon on Friday, when a draw will secure them top spot.

Switzerland, meanwhile, failed to muster a shot on target but remain on course to qualify too, with the 3-3 draw between Serbia and Cameroon earlier meaning a win against the Serbians will take Murat Yakin’s side through and a draw may also suffice.

They have made a habit of making at least the first knockout round at major tournaments, while Brazil are in Qatar to win a sixth World Cup and nothing less will do.

The Selecao were always going to miss Neymar, although coach Tite has said he is confident the Paris Saint-Germain superstar will recover from his ankle injury to play a part again at the finals.

After the class of Richarlison made the difference in their opening win over Serbia, this was a reminder for the Brazilians of the strength in depth in the European game.

Four years ago, before being dumped out by Belgium in the quarter-finals, they were also held by Switzerland in the group stage.

Mohammed Salisu opened the scoring against the run of play midway through the first half at Education City Stadium and Ajax midfielder Kudus doubled the Black Stars’ lead.

But the Asian side, who looked toothless in the first half, roared back after the break, pulling level through a quickfire double from forward Cho Gue-sung either side of the hour mark.

Ghana looked shell-shocked as the Korean fans celebrated wildly but they were back in front in the 68th minute when Kudus finished calmly at the back post after Inaki Williams failed to connect with a cross from the left.

The result takes Ghana into second in Group H on three points.

Cristiano Ronaldo’s Portugal will have six points and secure qualification for the last 16 if they beat Uruguay in the later kick-off in Qatar.

Despite their efforts, South Korea look likely to crash out of the tournament at the group stage for the third straight World Cup.

Cameroon fight back to hold Serbia

Cameroon kept their hopes of making the last 16 of the World Cup alive on Monday after fighting back from two goals down to draw a thrilling Group G encounter with Serbia 3-3.

But substitute Vincent Aboubakar and Eric Maxim Choupo-Moting snatched a draw with two quick-fire strikes just after the hour mark to leave both Cameroon and Serbia on a single point, two behind group leaders Brazil and Switzerland.

Had they lost, Cameroon would have been relying on the Swiss beating Brazil in order to not be eliminated with a game to spare, but instead, the west Africans still have a chance of getting out of the group stage for the first time since 1990.

Cameroon have a tough task ahead as they play Brazil in their final match, which according to reports they will play without first-choice goalkeeper Andre Onana who was dropped from the matchday squad just hours before kick-off following an unspecified disciplinary issue.

Media reports suggest that Onana has been sent home from the World Cup after a disagreement with Song, but that pre-match turmoil didn’t stop Cameroon putting in a fighting display against a Serbia team who probably deserved to win on the balance of play.