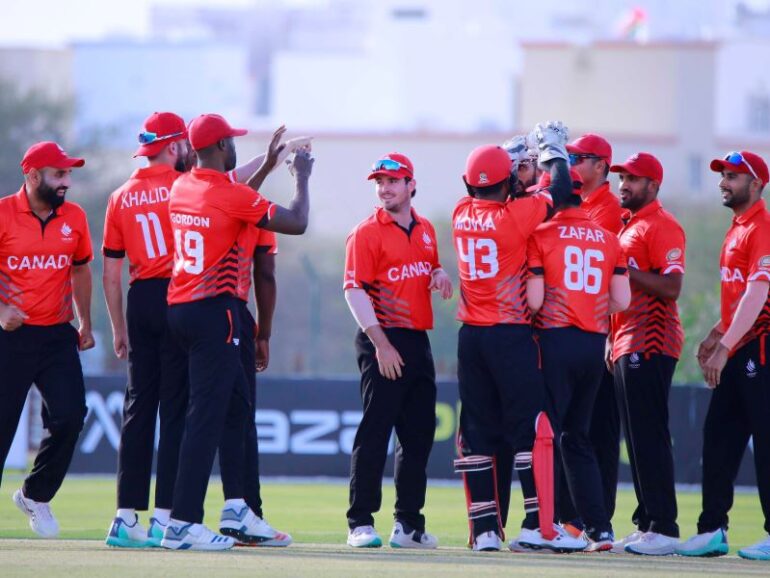 Muscat – Canada wrapped up a successful tour of Oman with a dominating win in the final one-dayer against the hosts to clinch the three-match series 2-1 at the Oman Cricket Academy ground on Saturday.

The series victory was icing on the cake after Canada emerged champions of the four-nation Desert Cup T20I series at the same venue last week.

In the final match of the 50-over series, Canada put Oman to bat first and bowled them out to a sub-par score of 166 in 49 overs. The batting of the hosts has been a matter of concern in the series and the woes continued with Ayaan Khan the top-scorer with 29. Jeremy Gordan and Saad Zafar combined well to wreck the Oman batting line-up with four wickets each.

Canada batters have been in good form with the top-order firing and either setting up a good total to defend or chasing down at a quick pace.

Openers Aaron Johnson and Srimantha Wijeyeratne along with Pargat Singh proved their calibre during the T20I series and were in good nick during the series.

Pargat Singh’s unbeaten 87 off 69 and Wijeyeratne’s unbeaten 58 off 49 helped Canada canter to a huge nine-wicket win as the visitors reached 167/1 in just 23 overs.

Earlier, Oman bounced back from the opening match loss to level the series 1-1 with an eight-wicket victory on Friday.

Put to bat first, Canada were bowled out for a paltry 97 in 37 overs with the hosts’ bowling attack superb on the day.

Canada began the series on a rousing note last Wednesday as they scored 229/9 in the opener and then bowled out Oman for 145 to record a huge 84-run win.

Harsh Thaker smashed a solid 75 and Nikhil Dutta played a 50-ball 47 to guide the team past 200-mark.

Bilal Khan was the most successful bowler with three wickets while Ayaan and skipper Zeeshan Maqsood claimed two wickets each.

Chasing a 230-run target, Oman floundered at the start losing three wickets for 37 inside ten overs. Dutta was the wrecker-in-chief with 4/12 in 5.2 overs. Sandeep Goud (31) and Ayaan Khan (29) provided a semblance of fight as the hosts were bowled out for 145 in 41st over. Jeremy Gordan and Pargat Singh took two wickets each.

At the end of the series, Thaker was the top run-getter with 97 with Pargat Singh scoring 96. Oman’s Jatinder Singh was the third best with 69. In bowling, Gordan and Dutta had six wickets each while Ayaan Khan was the most successful bowler for Oman with four wickets.