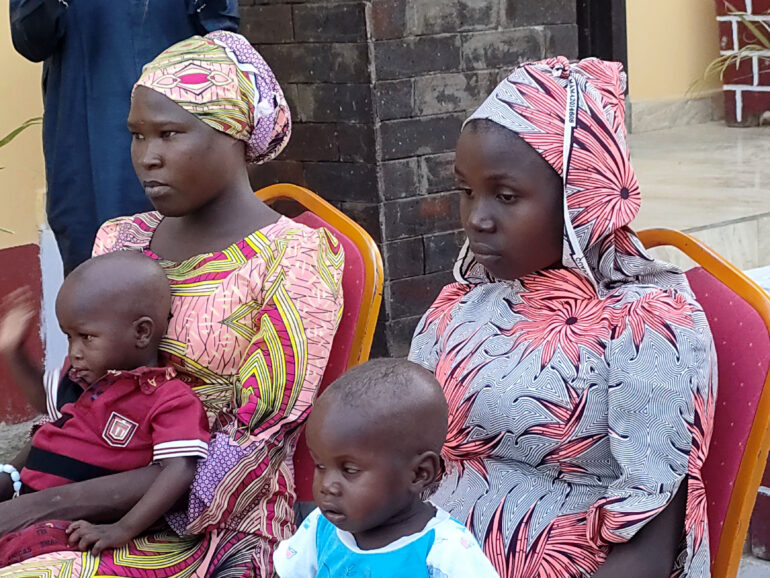 Maiduguri, Nigeria – Nigerian troops have found two former schoolgirls who were abducted by Boko Haram militants eight years ago, the military said on Tuesday, freeing some of the last victims of the 2014 Chibok abduction.

The two women each carried babies on their laps as they were presented by the military, after captivity with militants who stormed their school in April, 2014 in northeast Nigeria in a mass kidnapping that sparked international outrage.

Major-General Christopher Musa, the military commander of troops in the region, told reporters the girls were found on June 12 and 14 in two different locations by troops.

“We are very lucky to have been able to recover two of the Chibok girls,” Musa said.

Dozens of Boko Haram militants stormed the Chibok girls’ boarding school in 2014 and packed 276 pupils, aged 12-17, at the time into trucks in the militant group’s first mass school abduction.

Fifty-seven of the girls managed to escape by jumping from the trucks shortly after their abduction while 80 were released in exchange for some detained Boko Haram commanders following negotiations with the Nigerian government.

In the recent releases, one of the women, Hauwa Joseph, was found along with other civilians on June 12 around Bama after troops dislodged a Boko Haram camp, while the other, Mary Dauda, was found later outside Ngoshe village in Gwoza district, near the border with Cameroon.

On June 15 the military said on Twitter that they had found one of the Chibok girls named Mary Ngoshe. She turned out to be Mary Dauda.

“I was nine when we were kidnapped from our school in Chibok and I was married off not long ago and had this child,” Joseph told reporters at the military headquarters.

Joseph’s husband and father-in-law were killed in a military raid and she was left to fend for herself and her 14-month-old son.

“We were abandoned, no one cared to look after us. We were not being fed,” she said.

Thousands of Boko Haram fighters and families have been surrendering over the last year, fleeing government bombardments and infighting with the rival group Islamic State West Africa Province.

Dauda, who was 18 when she was kidnapped was married at different times to Boko Haram fighters in the group’s enclave in the Sambisa forest.

“They would starve and beat you if you refused to pray,” Dauda said about life under Boko Haram.

She decided to flee and told her husband she was visiting another Chibok girl in Dutse village near Ngoshe, close to the border with Cameroon.

With the help of an old man who lived outside the village with his family, Dauda trekked all night to Ngoshe where she surrendered to troops in the morning.

“All the remaining Chibok girls have been married with children. I left more than 20 of them in Sambisa,” she said. “I’m so happy I’m back.”

All the schoolgirls were released a month later except Leah Sharibu, the only Christian among the girls, who was held by the group for refusing to renounce her faith.