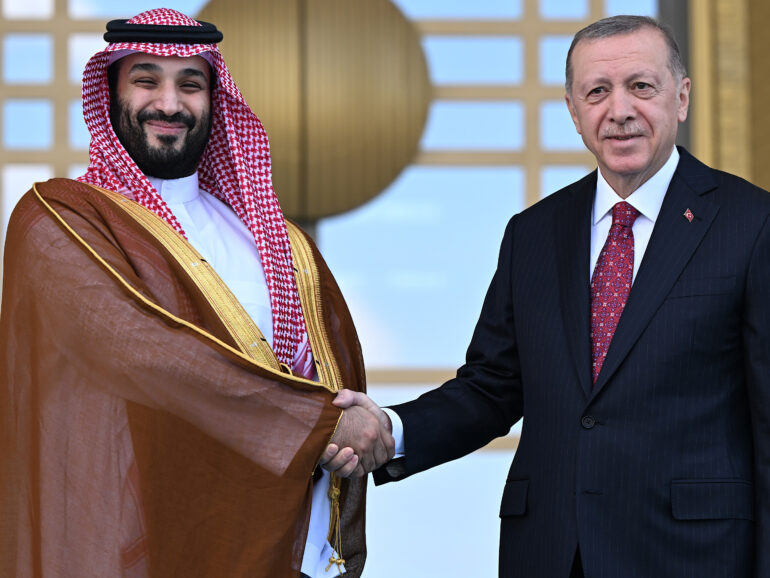 Ankara, Turkey – Saudi Arabia’s de facto ruler on Wednesday took another step out of his international isolation by paying his first visit to Turkey since the 2018 murder of journalist Jamal Khashoggi in the kingdom’s Istanbul consulate.

The talks in Ankara between Crown Prince Mohammed bin Salman and Turkey’s Recep Tayyip Erdogan come one month before US President Joe Biden visits Riyadh for a regional summit focused on the energy crunch caused by Russia’s invasion of Ukraine.

President Erdogan’s decision to revive ties with one of his biggest rivals is also driven in large part by economics and trade.

Turks’ living standards are imploding one year before a general election that poses one of the biggest challenges of Erdogan’s mercurial two-decade rule.

Erdogan’s Islamic-rooted government released gruesome details of the murder that included allegations that Khashoggi’s body was dismembered and its parts dissolved in acid.

But it is now drumming up investment and central bank assistance from the very countries it opposed on ideological grounds in the wake of the Arab Spring revolts.

“I think this is probably one of the most significant visits to Ankara by a foreign leader in almost a decade,” said The Washington Institute’s Turkey specialist Soner Cagaptay.

“Erdogan is all about Erdogan. He’s all about winning elections and I think he has decided to kind of swallow his pride.”

The Turkish leader is due to receive the crown prince at his presidential palace and then host him at a private dinner.

No press conference or signing ceremony is planned.

Analysts believe Prince Mohammed will be looking to see if he can win broader backing ahead of a possible new nuclear agreement between world powers and the Saudis’ arch-nemesis Iran.

“There is increased confidence (in Riyadh) that Ankara could be more useful in the current geopolitical environment,” the Eurasia Group said in a research note.

‘His bones would ache’

Turkey’s rapprochement with the Saudis began with an Istanbul court decision in April to break off the trial in absentia of 26 suspects accused of links to Khashoggi’s killing and to transfer the case to Riyadh.

The court’s decision drew strong protests from Khashoggi’s Turkish fiancee Hatice Cengiz. She told AFP on Wednesday that she viewed the summit as ‘unacceptable’.

“If Jamal had a tomb, his bones would ache,” said Cengiz.

But the Istanbul ruling paved the way for a politically sensitive visit to Saudi Arabia by Erdogan just three weeks later.

The kingdom’s state media ended up releasing a picture of Erdogan hugging the crown prince that created a furore in Turkey.

“He gets off the plane and hugs the killers,” fumed Turkey’s opposition leader Kemal Kilicdaroglu.

Ankara expects the mending of fences between the two Sunni powers to help prop up the Turkish economy at a crucial stage of Erdogan’s rule.

A Turkish official said the sides will discuss a range of issues that include cooperation between banks and support for small and medium-sized businesses.

Erdogan’s unconventional economic approach has set off an inflationary spiral that has seen consumer prices almost double in the past year.

Analysts believe the resulting drop in Erdogan’s public approval and depletion of state reserves mean the Turkish leader can ill afford to maintain his hostile stance toward petrodollar-rich Gulf states.

Turkey’s problems with the Saudis began when Erdogan refused to accept Egyptian President Abdel Fattah al-Sisi’s ouster of the Muslim Brotherhood from power in Cairo in 2013.

The Saudis and other Arab kingdoms viewed the Brotherhood as an existential threat.

Those rivalries intensified after Turkey tried to break the nearly four-year blockade the Saudis and their allies imposed on Qatar in 2017.

Analysts believe that Washington is watching this gradual return of regional calm with an approving nod.

“Encouraged by the United States, this rapprochement is relaxing tensions and building diplomacy across the region,” said the US-based Middle East Institute’s Turkish scholar Gonul Tol.

But Tol questioned whether Prince Mohammed was prepared to fully trust Erdogan.

The crown prince ‘will not easily forget the attitude adopted by Turkey after the Khashoggi affair’, she said.