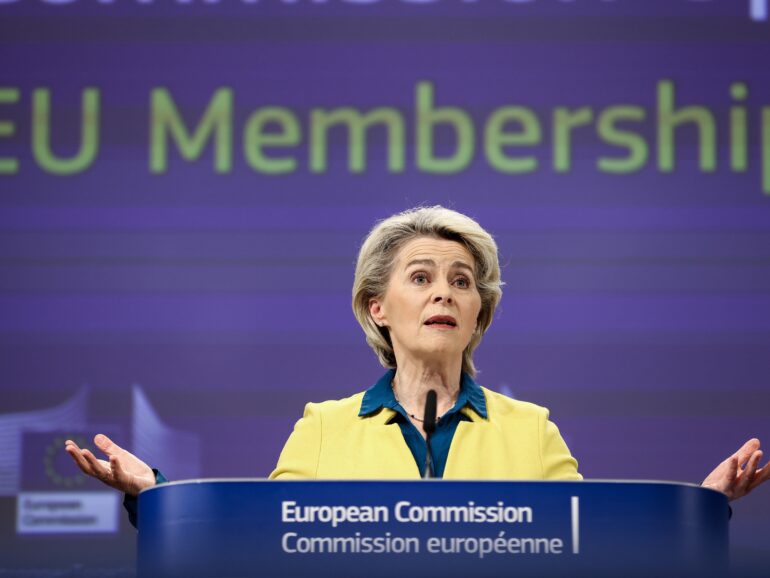 French minister Clement Beaune, whose country holds the EU’s rotating presidency, said after a meeting with his counterparts that there had been a ‘total consensus’ on taking the ‘historic’ step.

It is now down to EU leaders meeting Thursday in Brussels to sign off on the move and they are expected to agree to Ukraine and neighbouring Moldova joining the list of ‘candidates’ pushing for membership.

“There is not a single country which makes problems with the proposal,” said Luxembourg’s Foreign Minister Jean Asselborn.

“We will show great unanimity.”

The EU is set to impose conditions on Ukraine and Moldova over judicial reforms and tackling corruption, among other issues, before they could move on to formal entry negotiations.

It would then take years – if not decades – of painstaking evaluations before Ukraine would get close to becoming an actual member.

Georgia, which also applied for membership in Ukraine’s slipstream, looks likely to be told it needs to carry out further reforms before it can become a candidate.

Momentum has picked up for the EU to open the door to Ukraine after the leaders of heavyweights France, Germany and Italy threw their heft behind the move on a visit to Kyiv last week.

“It seems that we’re going to have a smooth or at least smoother discussion than we expected regarding the candidacy,” Ukraine’s ambassador to the EU Vsevolod Chentsov told journalists.

“We should not expect any crisis on Thursday.”

More sceptical nations such as the Netherlands and Denmark have said they will back the move provided it is made clear that reforms are needed.

“We want to help the Ukrainians to reach the European dream and granting candidate status is a step and an encouragement to do that,” said Danish Foreign Minister Jeppe Kofod.

“It’s also true that there’s a lot of obligations that have to be fulfilled.”