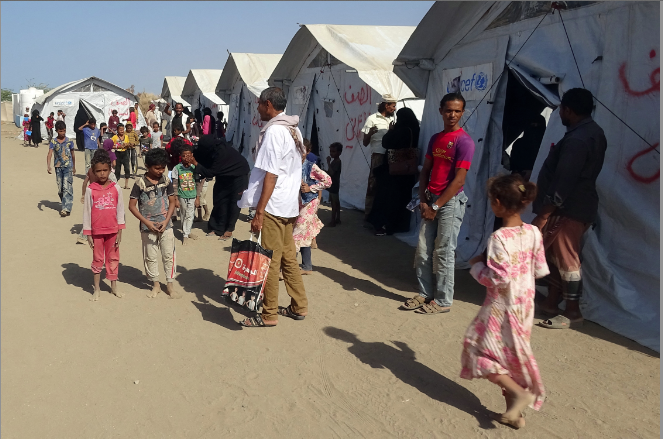 Dubai, UAE – The UN mission in Yemen’s rebel-held port of Hodeida expressed ‘great concern’ on Tuesday over claims it was being used for military purposes, and demanded access for an inspection.

The United Nations Mission to Support the Hodeida Agreement (UNMHA) said the port was a vital aid route for the impoverished country, where a seven-year war has pushed millions to the brink of famine.

The Saudi-led coalition fighting alongside government forces accused the Iran-backed Huthi rebels of militarising Red Sea ports and threatened to attack them, after the insurgents seized a United Arab Emirates-flagged ship last week.

“UNMHA reminds the parties that Hodeida ports are a crucial lifeline for millions of Yemeni people,” it said in a statement.

The coalition says the seized vessel, the Rwabee, was carrying medical supplies but the Huthis insist it was a military ship.

India on Tuesday appealed for the release of seven Indian nationals who were on board as part of an 11-strong crew, along with others from Ethiopia, Indonesia, Myanmar and the Philippines.

“The Government of India is making all efforts to secure their early release,” said external affairs spokesperson Arindam Bagchi.

“We urge the Huthis to ensure the safety and wellbeing of the crew members, and release them immediately.”

The hijacking on January 3 raised fears that the conflict could spill over into the Red Sea, a vital route for Gulf oil and cargo shipments.

It could also have severe consequences for Yemen, which the UN has said is facing the world’s worst humanitarian crisis, if it draws attacks on Hodeida.

“UNMHA has requested as part of its mandate to undertake an inspection,” the UN statement said, adding that protecting the ports was “in the interest of the Yemeni people”.

The UN mission is aimed at preserving the often ignored Hodeida Agreement, a ceasefire for the port agreed at peace talks in Sweden in 2018.

“There are no sustainable solutions to be gained from military escalation,” the UN special envoy for Yemen, Hans Grundberg, said in a statement.

“The parties can and should engage in a sustained political dialogue aimed at de-escalating the violence and finding a way towards a negotiated comprehensive solution,” he added.

Environmentalists have already warned that any conflict in the Red Sea raises risks for the Safer — an abandoned tanker carrying 1.1 million barrels of crude that has been lying off Huthi positions on the Yemen coast since 2015.

Experts say it could break apart or explode at any moment, which the UN says would cause a catastrophic oil spill.

Yemen’s civil war began in 2014 when the Huthis seized the capital Sanaa, prompting Saudi-led forces to intervene to prop up the government the following year.

The UN has estimated the war killed 377,000 people by the end of 2021, both directly and indirectly through hunger and disease.

Government forces and Huthi rebels have also been locked for months in a fierce battle in northern Yemen, with heavy fighting in the oil and gas rich Marib and Shabwa provinces.