His Majesty the Sultan meets sheikhs of North Sharqiyah 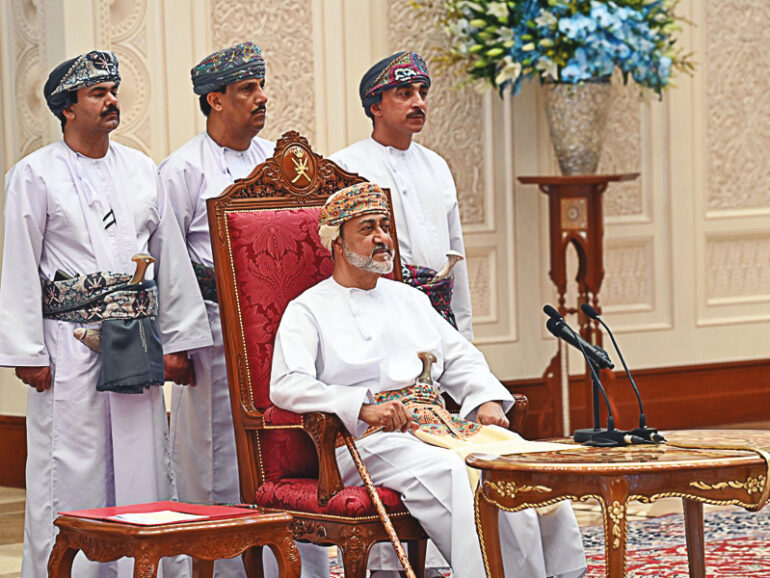 Manah – His Majesty Sultan Haitham bin Tarik held a meeting on Monday at Hisn A’Shumookh castle in Manah with sheikhs of North Sharqiyah.

The Diwan of Royal Court issued a statement to this effect reading as follows:

‘In continuation of the Royal meetings held by His Majesty Sultan Haitham bin Tarik with sheikhs of governorates in the sultanate to serve the interests of the country and citizens of this dear homeland and, in pursuance of His Majesty’s attention to interact directly with citizens, His Majesty the Sultan held a meeting on Monday, with sheikhs of the North Sharqiyah at Hisn A’Shumookh castle in Manah.

‘At the outset of the meeting, His Majesty the Sultan gave thanks and praise to the Almighty Allah for the great bounties of safety and security He has bestowed on Oman, praying to Allah that the march of building in Oman be a success.

‘After that, His Majesty the Sultan touched on a variety of issues of developmental, economic and social significance to citizens’ aspirations. He affirmed that the government is pressing ahead with measures to upgrade citizens’ living standards and achieve economic stability and prosperity. He pointed out that elevating Oman to its deserved status is a national duty that requires the contribution of each citizen.

‘Then, His Majesty the Sultan engaged in an open dialogue with the sheikhs, who presented demands and requests for development projects and services needed in their wilayats. This reflected the depth of the relationship between the leader and the people.

‘His Majesty the Sultan stressed that the government would spare no effort in shouldering its responsibilities and that the Renewed Renaissance is cutting its way through, in firm resolve, and will eventually attain its objectives.

‘May the Almighty Allah protect His Majesty the Sultan and grant him good health and well-being. May He protect Oman, its citizens and residents against all harms.’