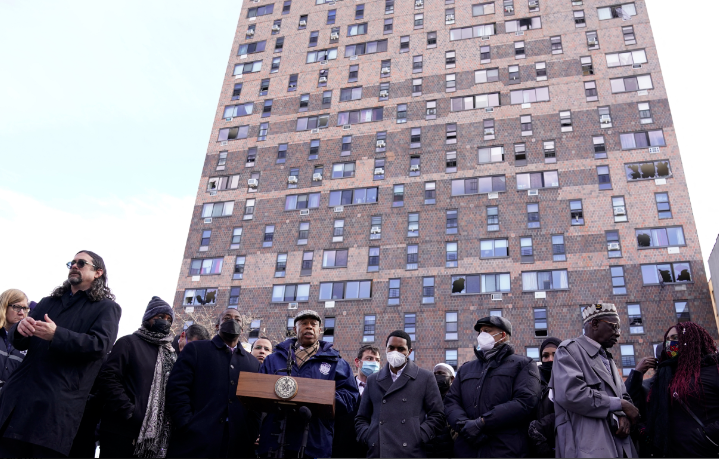 New York, US – Nine children were among at least 19 people killed and dozens injured when a fire tore through a high-rise apartment building in New York on Sunday in one of America’s worst residential fires in recent memory.

At least 200 firefighters responded to the blaze, which broke out just before 11:00 am (1600 GMT) on the second and third floors of a 19-story building in The Bronx.

Witnesses reported seeing trapped residents screaming for help from windows during the deadly inferno that the city’s fire chief said had been caused by a portable electric heater, leaving victims on “every floor.”

“There were a lot of kids crying, ‘Help! Help! Help!'” 38-year-old Dilenny Rodriguez, who escaped with her children, told AFP.

Mayor Eric Adams told reporters that 19 people had been confirmed dead and 63 had been injured, including several that were in a “critical condition.”

“This is going to be one of the worst fires in our history,” he said.

“Join me in praying for those we lost, especially the 9 innocent young lives that were cut short,” he added in a later tweet.

The mainly working class borough of The Bronx is home to a large number of immigrants and Adams said “many” of the building’s residents had been Muslims who moved to New York from Gambia.

Photographs and video posted on social media showed flames and thick black smoke billowing out of a third-story window of the brick building at East 181st Street as firefighters operated on a nearby ladder.

“The fire alarm of course started and then, everywhere was smoke,” said Mohamed Trawalley, 49, a resident of the building.

“So it was definitely devastating. A lot of smoke. Until now, when I clear my throat, all I see is black mucus. It was so serious, I’ve never seen anything like it before.”

“It was chaos,” George King, who lives directly adjacent to the building, told AFP.

“I’ve been here 15 years and it’s the first time I’ve seen something like this.

The injured were taken to five hospitals; many suffered from cardiac and respiratory arrest and severe smoke inhalation, officials said.

Michael Joseph, 32, who lives in the building, said it took him around 30 minutes to reach the hallway and then get down six flights of stairs because of how thick the smoke was.

“Actually due to all the smoke, and just inhaling it, it’s just so thick. And it’s like you cannot breathe, it’s like you’re being suffocated.”

He said that flames quickly engulfed much of the structure and that the smoke was so dense as to be “unprecedented.”

Nigro added that “very heavy” fire and smoke “extended the entire height of the building.”

“Members found victims on every floor, in stairwells,” he said.

“The last time we had a loss of life that may be this horrific was a fire which was over 30 years ago, also here in the Bronx,” Nigro added.

He explained that the fire originated in a duplex apartment on the second and third floors of the building.

The door to the apartment had been left open, allowing the fire and smoke to spread, he said.

“If you close the door the smoke and fire spread is contained within that apartment instead of spreading up the stairs,” Nigro told reporters.

Buildings like this one don’t have fire escapes, he added.

Rodriguez, the woman who escaped the fire with her children, said the smoke was so thick when she went down that “we couldn’t see.”

“They took my daughter away from me and I got panicked. Once I was walking the stairs, I saw a body on the floor that they tried to rescue. Also a dog, it was dead. And it was really devastating,” she said.

Adams, who only took office on January 1, said the fire was “truly a tragedy,” adding that many residents had been displaced.

“This is really a horrific day for us,” he said.

Nigro said the fire was the worst in the city since a blaze at Happy Land nightclub in 1990 in the Bronx, which killed 87 people and had been caused by arson.

In December 2017, 13 people were killed in a blaze in an apartment building in the Bronx in New York City’s deadliest fire in 25 years.

It had been started by a three-year-old boy playing with a gas stove.

Joseph, the resident who escaped the fire, says he mourns for the community.

“It’s really tragic and especially a new year just started and for people to lose their young children it’s sad.”