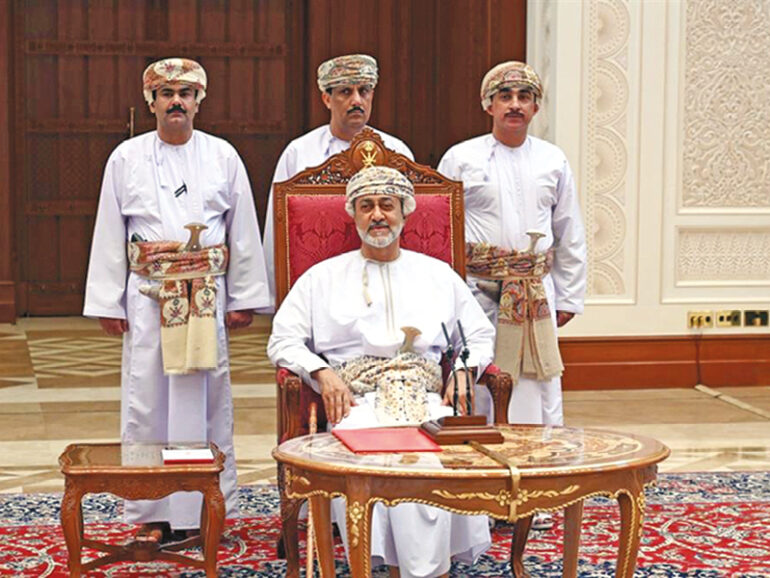 Manah – His Majesty Sultan Haitham bin Tarik held a meeting on Sunday at Hisn A’Shumookh castle in Manah with sheikhs of South Sharqiyah.

The Diwan of Royal Court issued a statement to this effect reading as follows:

In pursuance of the renewed Royal tradition of His Majesty Sultan Haitham bin Tarik to confer with citizens in all parts of the dear homeland and, following His Majesty’s conviction in the significance of listening in person to views and proposals serving the interests of the country, His Majesty the Sultan held a meeting with sheikhs of South Sharqiyah at Hisn A’Shumookh castle.

At the outset, His Majesty the Sultan thanked and praised the Almighty Allah for the great bounties He has bestowed on Oman and its people, praying that these riches be preserved and eternalised.

Then, His Majesty the Sultan reviewed a set of topics of concern on the domestic front. He said, “Oman is pressing ahead with its development plans and programmes in all fields, despite the challenges, with the prime objectives of realising sustainable growth and furnishing a prosperous present and future for all people, wherever they might be on this benign land.”

In his Royal conversation, His Majesty the Sultan observed that the governorates and municipal councils should perform their national roles as precisely as they are expected to do. He instructed the institutions to double their efforts to elevate the status of the local community.

As part of his attention to boost the potential of entrepreneurs and SME owners, to provide employment opportunities in all governorates, and to encourage entrepreneurship, His Majesty the Sultan issued his Royal directives to the departments concerned (Ministry of Finance, Authority for Small and Medium Enterprises Development and Oman Development Bank) to fund the respective programmes. He noted that the government will offer the incentives necessary to ensure the success of these initiatives.

His Majesty the Sultan then engaged in an open dialogue with the sheikhs, who presented requests for projects and development services needed in their respective wilayats. His Majesty gave directives endorsing the principle of partnership between the government and citizens when implementing projects that serve the public interest. He stressed the need to address difficulties that might come in the way of the domestic development march.

May the Almighty Allah protect His Majesty the Sultan and assist him with power to pursue the path of bounties. May He eternalise Oman’s riches and endow the country and its people with further peace and security.