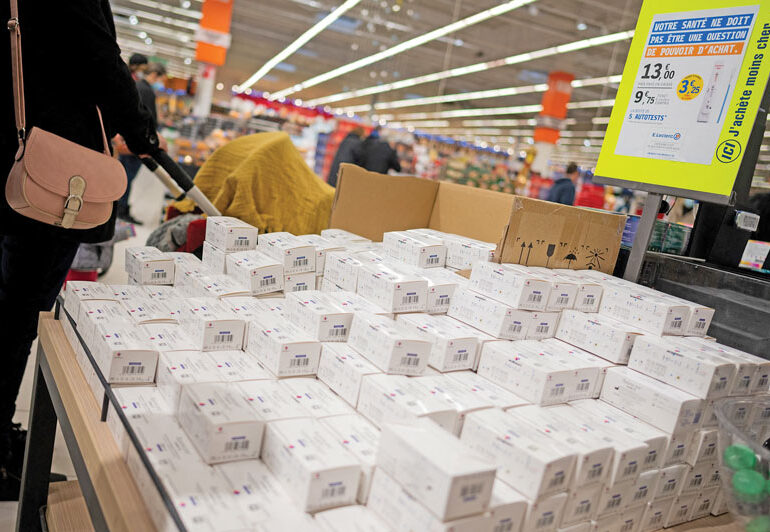 Paris, France – France set a new national record for COVID-19 on Wednesday with 208,000 new infections recorded over 24 hours with a post-Christmas surge in cases causing alarm in the government.

According to figures given by Health Minister Olivier Veran to a parliamentary hearing, the number of cases jumped by 15 per cent since Tuesday when a record 179,807 new infections were reported, and had doubled since Saturday.

“I wouldn’t call Omicron a wave anymore… I would call it a tidal wave,” Veran said, referring to the new variant which is replacing the Delta variant as the dominant strain in France.

Some ten per cent of the French population had been in contact with somebody who is infected with the virus, Veran said, adding that the figures ‘make your head spin’.

The minister had warned on Monday that France could reach more than 250,000 daily COVID-19 cases by the beginning of January, as a week of unrestricted Christmas parties and family get-togethers fuel the spread of the disease.

After a Cabinet meeting to discuss the crisis on Monday, Prime Minister Jean Castex announced several measures to try to contain the epidemic, but shied away from mass closures or lockdowns which have been reintroduced in other EU countries such as the Netherlands.

Some of the new restrictions, such as a ban on eating on high-speed trains or standing up in cafes and bars, were denounced by critics and political opponents as being too limited to be effective.

The government announced Wednesday that the country’s roughly 1,600 nightclubs would remain closed for a further three weeks after they were ordered shut on December 6.

The 208,000 cases announced on Wednesday is easily France’s highest daily figure since the virus emerged two years ago and is much higher than in previous waves.

Daily hospital admissions for COVID-19 in France are averaging above 1,000 a day, still well below the peak of 3,500 during the first wave in April 2020 or nearly 3,000 in the second wave in November last year.

But the exponential growth in case numbers is causing alarm.

The French Federation of Hospitals said on Tuesday that “additional measures in order to protect public hospitals are necessary in order to avoid saturating health services and emergency wards which will inevitably lead to more cancelled operations.”

Many hospitals, particularly those in the hotspots of France and the southern Mediterranean coast, are already cancelling non-essential operations due to the surge in COVID-19 admissions, most of which are unvaccinated people.

Despite France having one of the highest vaccination rates in the world, with 90 per cent of the eligible population having had at last one dose, Veran said that there were still five million unvaccinated people who are old enough to get jabs.

The government is staking its strategy on a new law that will be debated in parliament from Wednesday that will require citizens to show proof of vaccination in order to enter restaurants, cinemas, museums and other public venues.

The new “vaccine pass” system will replace the previous “health pass”, which could be obtained by providing a recent negative COVID test in the absence of vaccination.

President Emmanuel Macron has vowed to crank up restrictions on the unvaccinated, but has stopped short of making jabs mandatory.