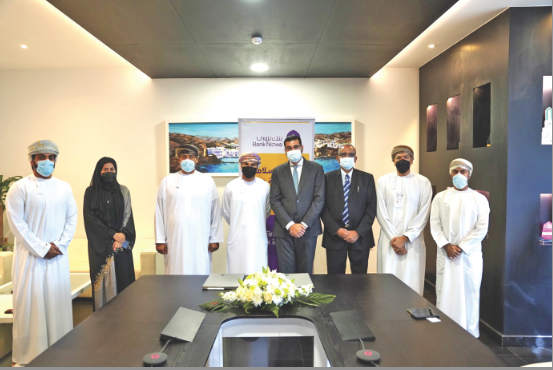 Muscat – The sultanate’s leading Islamic bank, Bank Nizwa on Wednesday celebrated and marked the official opening of the Khazaen Dry Port, which falls under the pillars of the National Logistics Strategy 2040. Bank Nizwa has recently extended financing facilities to help build the dry port.

An agreement in this regard was signed by Khalid al Kayed, CEO of Bank Nizwa and Ahmed Mohammed al Abri, chairman of Khazaen Dry Port, according to a press release.

Commenting on the financing of this national initiative, Kayed said, “Offering exceptional connectivity, the Khazaen Dry Port is set to serve as a trans-shipment point and will be a logistics hub that will link the sultanate to a number of countries. At Bank Nizwa, we view this as an opportunity to contribute to the socio-economic and infrastructural development goals of the country as the establishment of this dry port will have numerous positive implications on the economy.”

“By supporting large-scale projects that offer tangible added value to the national economy, Bank Nizwa seeks to highlight the growing preference of Sharia’a-compliant financing while also establishing its distinct footprint in the country’s journey of progression,” he added.

The primary objective of Khazaen Dry Port would be to serve the Sohar Port while focusing on the trade activities in Muscat and nearby areas such as Nizwa, Sur and Ibra. After its development, the movement of empty containers will be significantly minimised, resulting in lower transportation costs for consignees and empty container storage costs for shipping lines.

“With most of the sultanate’s trading activities being routed through Muscat and the adjoining areas, the establishment of the Khazaen Dry Port will be instrumental in facilitating trade activities and developing an integrated logistic system that will enhance performance, drive economic growth and position Oman as a global logistics hub,” said Abri.

“We appreciate Bank Nizwa’s efforts in playing an integral role in the development of Oman’s critical infrastructure,” he added.

Bank Nizwa is in strong alignment with the country’s diversification plans and has taken several initiatives to contribute to the development of various sectors in Oman.