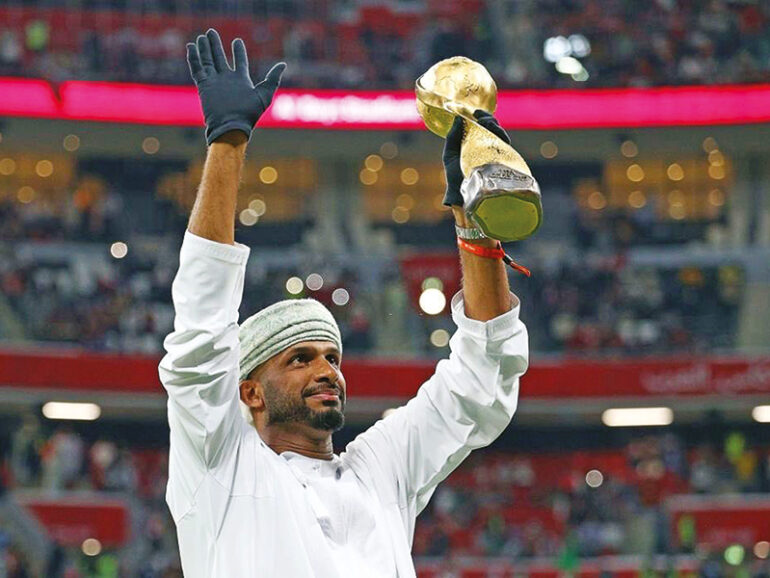 Muscat – Oman international goalkeeper Ali al Habsi presented the trophy in the final match of the 2021 FIFA Arab Cup which was held in Qatar on Saturday.

Habsi described the honour given to him to present the Arab Cup as a “gesture of appreciation to me and my country from the International Football Association in this majestic Arab sports event”.

The 2021 FIFA Arab Cup was the tenth edition of the Arab world’s national team football tournament. It was the first edition under FIFA’s jurisdiction. It took place between November 30 and December 18, as a prelude to the 2022 FIFA World Cup which will be held in Qatar.

The tournament phase involved 16 teams, of which seven came through the qualifying round. All 23 teams competing were under the auspices of either the Asian Football Confederation or the Confederation of African Football.

Citizens hailed the honour given to Habsi.

Sayyed Khalid Hamad al Busaidi, former chairman of Oman Football Association, said, “Ali al Habsi is the pride of Oman and represented Arabs in European stadiums. We thank the organising committee that chose Habsi in appreciation of Oman and his foray in international football. He represented Arabs well throughout his career.”

According to Dr Jassem al Shukaili, Habsi deserved the honour. “He has achieved many feats in the field of football at the English, European and Asian levels.”

Citizen Ahmed al Balushi thanked Qatar for choosing Habsi to present the cup representing Oman in the first Arab championship under the supervision of FIFA. “We are proud of Habsi; he made us proud in European football.”

In the final match on Saturday, Algeria beat Tunisia to win the 2021 FIFA Arab Cup and Qatar beat Egypt in the third-place playoff.