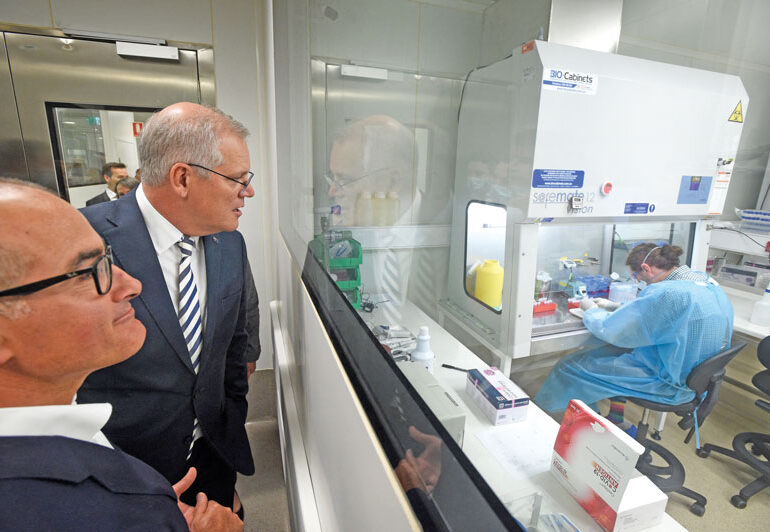 Sydney – Australia will push ahead with plans to ease COVID-19 restrictions before Christmas, officials said on Tuesday, even as new coronavirus cases in the country’s most populous state reached a 10-week high.

After a string of infections linked to festive season parties in and around Sydney, New South Wales state recorded more than 800 new COVID-19 cases on Tuesday – its highest total since October 2.

Authorities said the new cases would not deter them from dropping most public mask-wearing requirements from Wednesday or lifting a ban on unvaccinated citizens entering restaurants, bars and major events.

“We have decided as a country to live with this virus,” said Prime Minister Scott Morrison, touting high vaccination rates as a guarantee of a virtually restriction-free festive period.

“This Christmas, we’re about to have is a gift Australians have given to themselves, by the way they’ve worked together with the settings we’ve put in place,” he said.

After a glacial initial vaccine rollout, more than 89 per cent of Australians aged over 16 are now double-dose vaccinated and 93 per cent have received their first jab.

The gap required before a third-dose booster can be administered has been shortened from six months after the second jab to five months to provide better resistance.

Australia has also detected more than 85 cases of the Omicron variant, which is feared to be highly transmissible and more vaccine resistant.

Many Western countries have begun to reintroduce restrictions as they try to roll out boosters and case numbers rise.

New South Wales health minister Brad Hazzard said he was ‘very concerned’ not enough people were getting a booster shot, but pledged not to introduce any snap lockdowns.

“My concern is that once the unvaccinated are mixing in with the vaccinated, you’d have to expect the numbers will increase even further and that’s worrying because that puts pressure on our doctors and our nurses and our frontline health system,” Hazzard said.

Adding to the pressure, Australia is ploughing ahead with reopening domestic and international borders, welcoming back vaccinated skilled migrants and students from Wednesday.

And after lengthy closures that separated families and friends for months, tropical Queensland state opened its borders to hotspot areas Monday while the island state of Tasmania will follow suit on Wednesday.

Only Western Australia – a vast, mineral-rich region with a stubborn independent streak – will remain locked off over the holidays, with its border to remain closed until February 5.

Announcing plans to build a Moderna mRNA vaccine-manufacturing facility in Melbourne, Morrison insisted Australia is ‘better prepared than almost any other country in the world to deal with this and continue to stare this virus in the face and live with it’.

Australia has recorded more than 230,000 cases of COVID-19 and 2,113 related deaths in a population of 25mn since the pandemic began.