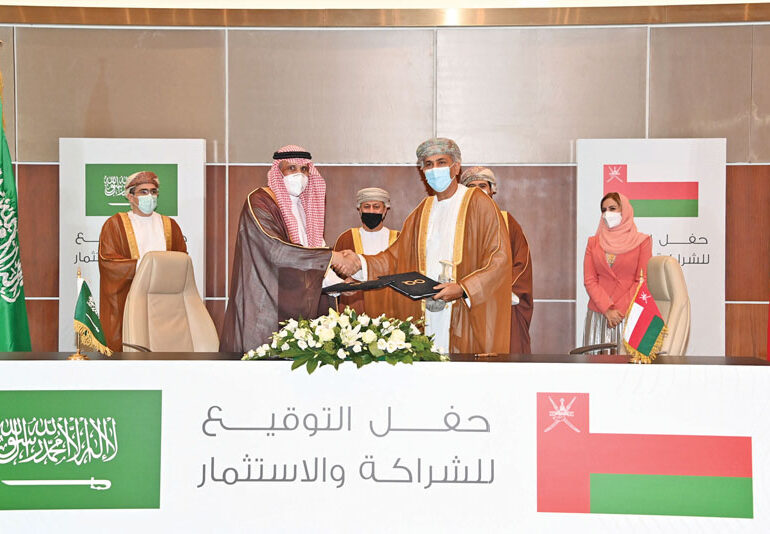 Muscat – Oman and Saudi Arabia are entering a new era of economic cooperation which is set to boost bilateral trade between the two countries and create investment opportunities worth billions of dollars.

A group of leading Saudi companies and a number of companies owned by Oman Investment Authority (OIA) and the private sector have signed 13 memorandums of understanding (MoUs) worth US$30bn, Saudi Press Agency (SPA) reported on Tuesday.

These agreements were signed on Monday on the sidelines of the visit of Prince Mohammed bin Salman bin Abdulaziz al Saud, Crown Prince, Deputy Prime Minister and Minister of Defence of the Kingdom of Saudi Arabia, to the sultanate and in embodiment of the growing economic relations between the two friendly countries.

Falih clarified that the signing of MoUs will enhance investments in a number of fields, which will be reflected in the development of services and the achievement of the aspirations of the Saudi Vision 2030 and Oman Vision 2040.

He stressed that these MoUs will contribute to strengthening the relations between the two brotherly countries, by supporting mutual investment relations, developing available investment opportunities as well as achieving economic integration between the two countries.

Speaking at the Omani Saudi Business Forum on Monday, Eng Redha Juma al Saleh, chairman of Oman Chamber of Commerce and Industry (OCCI), said, “A manifestation of deep-rooted historical relations between Oman and Saudi Arabia and the keenness of their leaderships requires us to intensify efforts to meet the aspirations of the two countries’ peoples, notably the need to speed up joint projects that realise economic diversification and other goals.”

Saleh noted that the inauguration of the desert highway between Oman and Saudi Arabia will pave the way for a new era of partnership, provide more direct access for the flow of goods and services and spruce up economic and commercial activities.

Meanwhile, the Omani Saudi Business Council (OSBC) also held a meeting on Monday during which it discussed the latest steps taken to form sectoral committees representing the two countries.

At the OSBC meeting, Ajlan Abdulaziz al Ajlan, chairman of the Council of Saudi Chambers of Commerce and Industry, said that investment and commercial exchange opportunities are abundant and this requires the two sides to rally efforts to activate and streamline cooperation.

Sheikh Ali Hamad al Kalbani, head of Omani side at the OSBC, said that, over the next few days, sectoral committees will hold direct meetings to forge joint visions about investment projects and submit the same to the respective ministers.

The signed MoUs aim to enhance investments and joint work in the specific projects within promising economic sectors including energy, petrochemicals, renewable energy, healthcare, and tourism. The agreements also includes manufacturing industries, food industries, transportation and logistics, information technology and financial technology, in addition to a number of qualitative investments in the Duqm region.