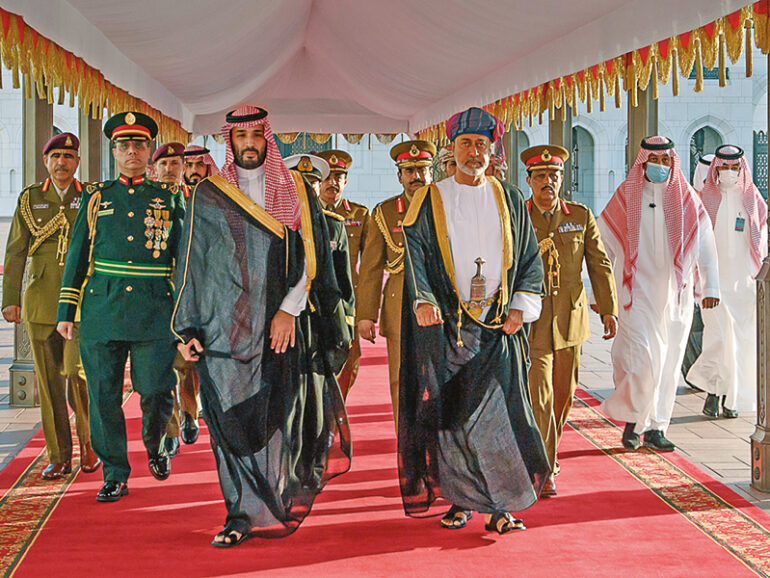 In the morning, the Crown Prince was accorded an official welcome at Al Alam Palace accompanied by a 21-gun salute. After initial greetings, His Majesty the Sultan and Prince Mohammed sat down for a round of official talks. The session reviewed numerous aspects of bilateral cooperation, ways to consolidate ties between the peoples of the two countries and means of realising their aspirations. The two sides also exchanged views on issues of common concern.

The Sultanate of Oman and the Kingdom of Saudi Arabia issued a joint communique following the visit of Prince Mohammed bin Salman al Saud, Saudi Crown Prince, Deputy Prime Minister and Minister of Defence, to Oman, reading as follows:

A round of official talks was held by His Majesty Sultan Haitham bin Tarik and Prince Mohammed. They explored aspects of joint cooperation and ways of developing these in different fields and commended the level of coordination in political, economic, military and security spheres for the good of the two peoples.

The two sides also lauded the accomplishments made during the historic visit of His Majesty the Sultan to Saudi Arabia in July 2021. They underlined the outcome of the Royal visit, which resulted in expanding the scope of bilateral relations and the signing of a memorandum of understanding for the establishment of the Oman-Saudi Coordination Council, which will contribute to the realisation of the desired integration in all sectors.

The two sides expressed their determination to enhance economic cooperation by encouraging government and private sectors with the aim of forging quality commercial and investment exchange to serve their visions (Oman Vision 2040 and Saudi Vision 2030) and consolidate partnership between the two countries’ private sectors. In this respect, the two sides welcomed the opening of the 725km Desert Highway linking the two countries which will significantly boost travel of citizens and the smooth flow of supplies towards the desired full-fledged economic integration. They also welcomed the opening of border checkpoints in Oman and Saudi Arabia.

In the field of energy, the two sides extolled Opec+ efforts – led by Saudi Arabia, with the participation of Oman – that resulted in stabilising petroleum markets. They also underscored the importance of such sustained cooperation and the commitment of all participating countries to the mandates of the Opec+ agreement.
The two sides stressed the need to study all opportunities for cooperation in the oil, gas and petrochemicals sector, as well as cooperation in advancing petroleum products trade, the use of renewable energy and its technologies, electrical energy, commercial exchange and maximising benefits from local energy content for implementing power projects.

The Omani side valued the initiatives made by Saudi Arabia to address climate change, including Saudi Arabia’s Green Initiative and Green Middle East launched by Prince Mohammed.

They agreed to step up cooperation in the field of energy and climate change within the framework of Green Middle East to enhance gains at local, regional and international levels.

The two sides also welcomed an initiative to implement Circular Carbon Economy, launched by Saudi Arabia when chairing the G20 Summit. The initiative was hailed by the economic group as a comprehensive framework to address challenges posed by gas emissions responsible for global warming. The initiative, based on the use of available technologies, constitutes an economically sustainable method to manage gas emissions.

The two sides expressed their satisfaction with the outcome of the third meeting of the Oman-Saudi Business Council and the Economic Forum held on the sidelines of the meeting.

The two sides affirmed their keenness to upgrade the level of cooperation and welcomed the signing of MoUs in the field of radio and TV, exchange of news between Oman News Agency and Saudi Press Agency and another in the field of visual, audio and print media.
The two sides also welcomed the meeting held by Oman Journalist Association and Saudi Press Association.

The two sides reiterated their determination to bolster joint action in the field of tourism and the development of the sector due to its significance in augmenting domestic product, creating employment opportunities and diversifying the economy.

In the political arena, the two sides reaffirmed the fundamentals of the Al Ula Declaration issued on January 5, 2021, which approved the implementation of the vision of the Custodian of the Two Holy Mosques endorsed by the GCC Supreme Council during its 36th session in December 2015.

The two sides exchanged views about matters of common concern in the regional and international arenas. They affirmed their determination to work together to serve the joint interests and consolidate security and stability in the region and the world at large. They also voiced their support for all efforts aimed at the establishment of peace in the Middle East. They underlined the importance of reaching a comprehensive settlement for the Palestinian-Israeli conflict in accordance with the Arab Peace Initiative and related international legitimacy resolutions in a manner that safeguards the right of Palestinian people to set up their own independent state on the borders of 1967, with East Jerusalem as its capital.

On Yemen, the two sides agreed to continue efforts to find a political solution to the crisis based on the GCC initiative, the outcomes of the National Comprehensive Dialogue, the Security Council Resolution and the Saudi Arabian Initiative – all with the overall aim of alleviating the suffering of the Yemeni people.

The two sides also welcomed the success of the elections in Iraq and expressed hope for the formation of an Iraqi government capable of establishing peace and security and realising the country’s prosperity.

The two sides welcomed the accord reached by parties to the Transitional Stage in Sudan and reaffirmed their support for all that might achieve security and stability in the country. They wished Sudanese people progress and prosperity.

On Lebanon, the two sides affirmed the importance of comprehensive reforms to help the country emerge from its crisis and to make sure that it will not constitute a hotspot for any terrorist or criminal acts that might compromise the stability of the region.

The two sides highlighted the importance of consolidating security and stability in Afghanistan and voiced their support for relief efforts and humanitarian assistance in Afghanistan.

The two sides also underscored the significance of cooperation in effectively addressing the Iranian nuclear file to help contribute to the establishment of regional and international security and stability. In this context, they affirmed their support for principles of good neighbourliness, respect for UN and international resolutions and the need to spare the region all destabilisation activities.

At the end of the visit, Prince Mohammed thanked His Majesty the Sultan for the warm welcome and hospitality accorded to him and his delegation.

On his turn, His Majesty the Sultan expressed his best wishes for the Custodian of the Two Holy Mosques King Salman bin Abdulaziz al Saud. He wished Saudi people further progress and prosperity.