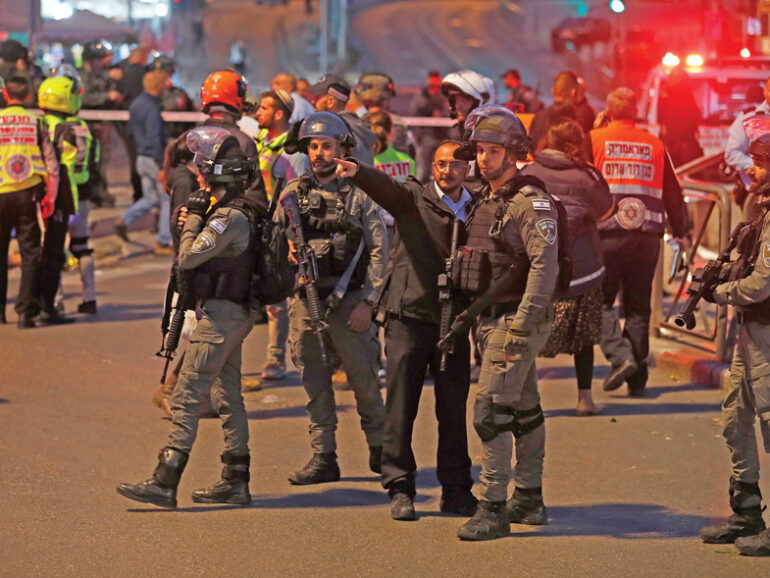 The assailant stabbed a man near the Damascus Gate to the walled Old City and then ‘attempted to stab a border police officer’, police said in a statement.

‘Police neutralised the stabber,’ it added.

A spokeswoman for the Palestinian Red Crescent said police killed the assailant.

Israel’s Magen David Adom emergency service said the stabbing victim was a 20 year old religious Jew who was taken to hospital in ‘moderate to severe condition’.

Video released by police showed Salima tackling a man in ultra-Orthodox garb, then running to attack a police officer before he was shot.

Footage filmed by a bystander and widely shared on social media showed the assailant lying prone on a sidewalk as police continued to fire shots.

Border police commander Amir Cohen said he ‘fully backed’ the forces who ‘responded as needed to the incident’ to prevent additional harm.

The force has launched an investigation into the incident, spokesman Tamir Pero said.

Israeli Prime Minister Naftali Bennett praised police for acting ‘quickly and decisively… against a terrorist who tried to murder an Israeli citizen’.

The Palestinian Foreign Ministry called the shooting a ‘field execution’.

Mohammed Hamadeh, Jerusalem spokesman for Islamist group Hamas which controls the Gaza Strip, decried the ‘deliberate shooting of a wounded young man lying on the ground’.

‘The execution of a person who no longer poses a threat is a horrible and terrible crime,’ Arab-Israeli lawmaker Aida Touma-Sliman said on Twitter.

Police fired tear gas as Palestinians faced off with security forces near Damascus Gate after the shooting.

The Red Crescent said three Palestinians were hospitalised during the confrontation.

Days before that, security forces shot dead a 16 year old assailant in the Old City who they said stabbed two police officers.

The Old City lies in east Jerusalem, which Israel occupied in the Six-Day War of 1967 and later annexed in a move never recognised by the international community.

The Palestinians claim the city’s eastern sector as the capital of their future state.