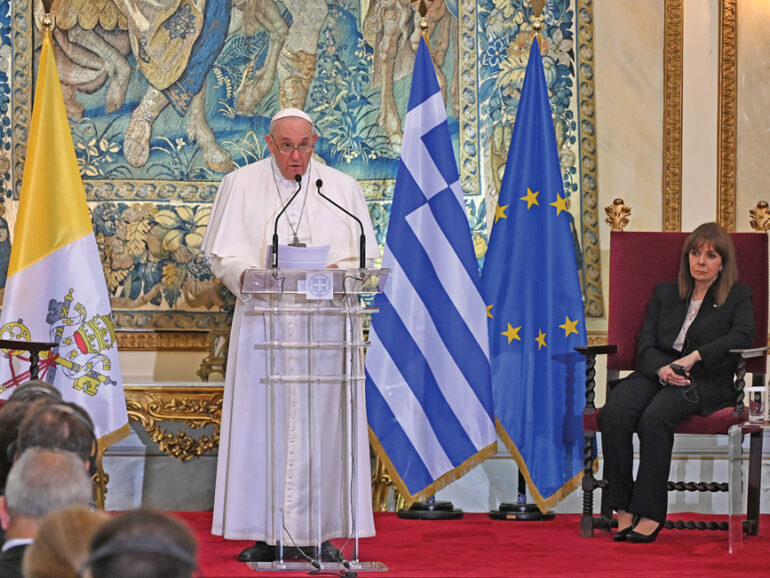 Athens – Pope Francis on Saturday blamed the EU’s nationalist divisions for a lack of coordination on migration as he began a landmark trip to Greece, aiming to improve complicated relations with the country’s Orthodox Church.

Francis said that Europe was ‘torn by nationalist egoism’ on migration during a meeting with EU vice-president Margaritis Schinas, Greek President Katerina Sakellaropoulou and Prime Minister Kyriakos Mitsotakis, among other officials.

The European community ‘continues to temporise’ and ‘appears at times blocked and uncoordinated’ instead of being an ‘engine of solidarity’ on migration, the pope said.

Francis has long championed refugees, and on Sunday will return to the island of Lesbos, which he last visited in 2016 during the early years of the migration crisis.

The 84 year old’s visit to the Greek capital is the first by a pope since John Paul II in 2001, which in turn was the first papal visit to Athens since the 1054 Schism between the Catholic and Orthodox Churches.

Flying in after a two-day trip to Cyprus, the pope landed shortly after 0900 GMT in the Greek capital, where security was heightened over expected protests by Orthodox hardliners among whom anti-papal sentiment remains strong.

Strong wind offered an unexpected challenge, with Francis coming down the stairs of the plane skullcap in hand.

“I ardently long to meet you all, all, not only Catholics, but all of you,” he said in a message before embarking on his trip, which began on Thursday with the visit to Cyprus.

“By meeting you, I will quench my thirst at the springs of fraternity.”

Francis was scheduled to see the head of the Church of Greece Archbishop Ieronymos later on Saturday, followed by members of Greece’s small Catholic community, which represent just 1.2 per cent of the majority-Orthodox population.

“The Holy Father’s presence in Greece is a boost for us… Catholics in Greece must take advantage of it,” Markos Foscolos, parish priest of St Nicholas on the island of Tinos, told reporters this week.

Francis flies back to Rome on Monday.

Up to 2,000 police are deployed in Athens to monitor possible disruptions by Orthodox hardliners, who blame the Catholics for the Schism and the 1204 sacking of Constantinople during the Fourth Crusade.

Reciprocal excommunications exchanged between the two churches after the Schism were only lifted in 1965.

Authorities have banned protests in the Athens centre.

Relations with the Church of Greece are much better than they were ahead of John Paul’s visit, Pierre Salembier, head of the Jesuit Catholic community in Greece, said.

But he said there were still some ‘known anti-Catholic fanatics’ within the Church’s governing body.

The bishop of Piraeus called the pope’s visit ‘immoral’, according to the union of Orthodox journalists.

During his visit to Cyprus, Francis condemned ‘slavery’ and ‘torture’ in migrant camps, drawing parallels with World War II.

The Cyprus government said on Friday that 50 migrants, including two Cameroonians stuck for months in the divided island’s buffer zone, will be relocated to Italy thanks to Francis.

On Sunday the pope will again visit Greece’s Lesbos, a flashpoint of the 2015 refugee crisis and thereafter, ‘as a pilgrim to the wellsprings of humanity’ to call for the integration of refugees.

The island’s sprawling Moria migrant camp, which the pontiff visited in 2016, burnt down last year and has been replaced by a new EU-funded facility.

The new Mavrovouni camp is part of a series of ‘closed’ facilities on Greek islands with barbed wire fencing, surveillance cameras, X-ray scanners and magnetic gates that are closed at night.

NGOs and aid groups have raised concerns about the new camps, arguing that people’s movements should not be restricted.

Thirty-six groups active in Greece last week sent a letter to the pope, drawing his attention to the rights of people in the camps and asking for his help in halting illegal pushbacks of migrants allegedly carried out by Greek border forces.

The pontiff is expected to visit the camp and will meet two ‘randomly chosen’ families, an official said.

“We await him with open arms,” said Berthe, a Cameroonian asylum seeker at the camp.

She said she hoped the pope ‘will pray for us to help us overcome the insecurities we have lived, through faith’.

On Wednesday, nearly 30 asylum seekers landed near the camp. On Friday, two migrants died when a speedboat overturned near the Greek island of Kos.