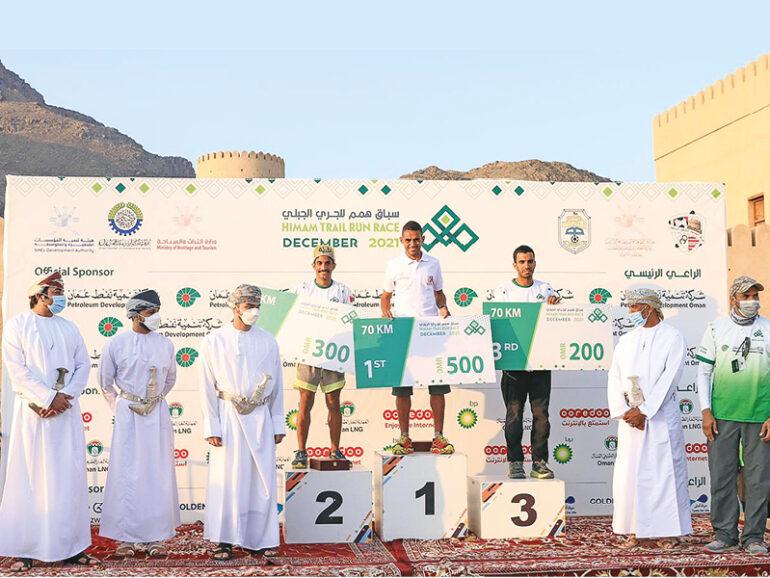 Muscat – At the first glimpse of sunlight on Friday morning, around 421 trail runners representing 35 countries lined up at Birkat al Mouz Bayt Ar Rudaydah castle to take on the Himam Trail Run Race. The moment the clock struck 6.15am, the starting pistol sounded and they were off, climbing into the mountains an elevation of almost 2,210m.

This year’s Himam Trail Race featured three distances, 20km, 35km and 70km. The first runners began to cross the finishing line after just over one hour 23 minutes after completing the 20km race and more athletes crossed the line for the next two hours and 50 minutes until all 145 athletes returned safely.

Each course headed towards the village of Al Muaydin and nearby date plantations before ascending the mountainside in the ultimate test of endurance. The routes then reversed course to head for the finish line with a gentle descent back down the mountain. The battle for the lead went almost to the finishing line before Imad al Farsi (Oman) managed to outlast Nasr al Naabi (Oman) to take the gold medal. Omar al Hadrami (Oman) finished third. The top ten male finishers were all Omani. The first female home was Ciara Blackstock (Ireland) who finished 11th overall in a dead heat with tenth place, completing the 20km course in 1:39:28.

Next to cross the line were the leaders in the 35km race, once again dominated by local runners. Yusuf al Subaihi (Oman) took first place in a time of 3:01:43, followed six minutes later by Jamal al Khatri (Oman) in a time of 3:07:35. Just 12 seconds later, Ghaith al Saidi (Oman) finished third in a time of 3:07:47. The first female runner to complete the course was Joanna Buchholz (Great Britain) in a time of 4:25:28, finishing 22nd overall.

Winners of each race received a prize of RO500, RO300 for second and RO150 for third. The first female finisher received RO150 and all runners completing the course within 18 hours received a medal. The 70km race, won by Morocco’s Rachid el Murabity, this year was registered at the International Trail Running Association (ITRA) and carried three points for each finisher which helps towards ranking positions and entry into the world’s toughest trail running marathon races, while the 35km carried three ITRA points.

The Himam Trail Race was organised by Himam Adventure, under the umbrella of Al Sahwa Team and Nizwa Club, and supported by the Ministry of Heritage and Tourism, Ministry of Culture, Sports and Youth, Oman Chamber of Commerce, Industry and Investment Promotion, and the Authority for SME Development (ASMED) in Dakhliyah.