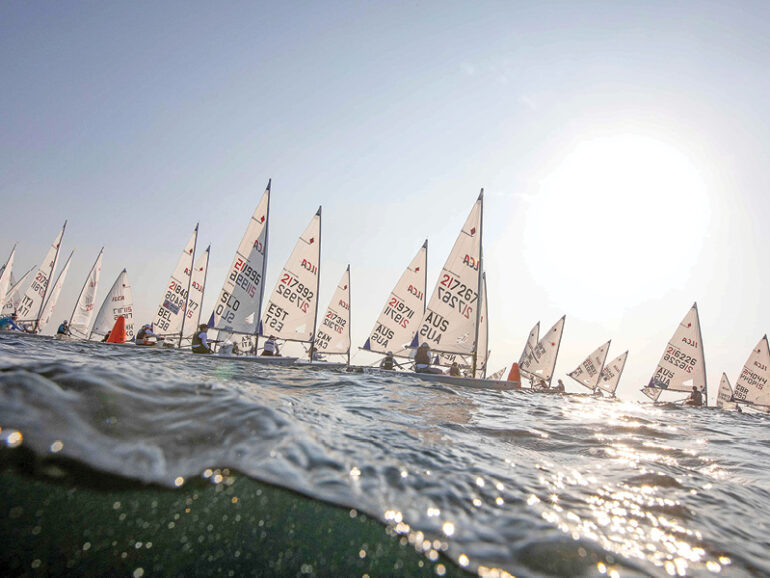 Muscat – Day three of the 2021 ILCA 6 World Championships was once again influenced by the wind.
Just two races in the men’s category and one in the women’s were completed at Barceló Resort Mussanah on Friday as the sailors struggled to get to grips with the changing wind patterns.

The men’s leaderboard remains unchanged from Thursday with Oman’s Almoutasim al Farsi out in front, holding a six-point lead over Nik Pletikos of Slovenia after winning one race and finishing second in the other.

Abdul Malik al Hinai of Oman moved into third position when Umut Eyriparmak had to retire from the second race after making an excellent start by winning the first. He ends the day in fourth place. Ali al Saadi of Oman retained fifth position and stays within touching distance of the leaders.

The only women’s race of the day was dramatically impacted by the weather as seven of the fleet were given the black flag and disqualified for prematurely starting the race, including Thursday’s leader Julia Büsselberg of Germany and Anne-Marie Rindom of Denmark.

That allowed Emma Plasschaert of Belgium to take the victory and move to the top of the leaderboard.
Büsselberg slips to second and Agata Barwinska of Poland moves into third. Viktorija Andrulyte of Lithuania moved into fourth place after a strong display and yesterday’s second placed sailor Vasileia Karachaliou dropped to fifth after Friday’s race. The fleet is still very close with just seven points between first and sixth.

Nik Pletikos of Slovenia said, “Today (Friday) we had quite shifty wind, not much wind which was tough for me as one of the heaviest in the fleet. So, I struggled a bit in the up-wind. We’ll see what happens tomorrow, hopefully there will be more wind.”

Viktorija Andrulyte of Lithuania said, “There were light to medium winds today (on Friday) for us, which I enjoy a lot. There are still a lot of races to go, my expectation is that I just want to keep pushing myself and enjoy. The race is very hard, the fleet is really good, but it’s great to compete and be against the best sailors in this class.”

Following racing on Friday, the sailors were treated to an Arabian Night where they were able to experience Omani food, Henna art and traditional dancing with an Omani band.

The sailing event is supported by national carrier Oman Air, OQ and the Barceló Mussanah Resort as official partners, and Be’ah as environmental supporter.

The National Mineral Water Company Salsabeel Water provided water for the event while the Royal Navy of Oman provided medical support throughout, said a press statement.