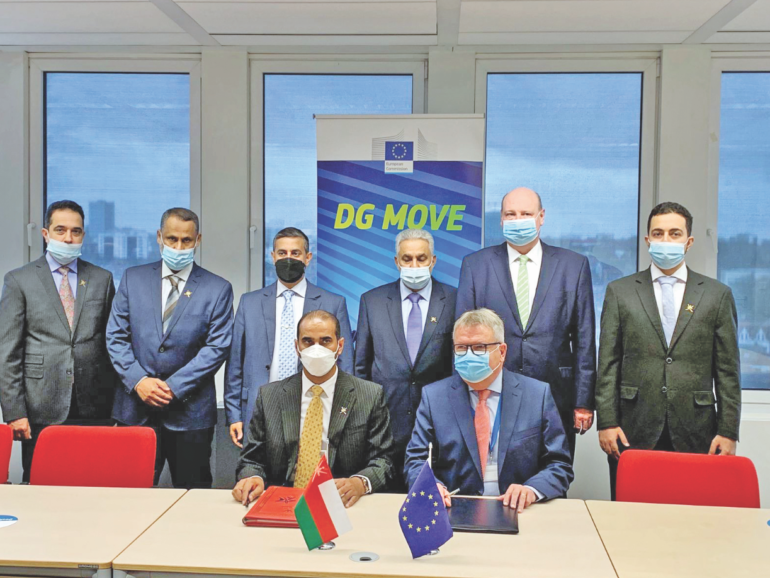 Brussels, Belgium – Following two years of negotiations, Oman’s Civil Aviation Authority formally initialled a Comprehensive Air Transport Agreement with the European Union and its member states on Wednesday signalling the sultanate’s ambitions of a more liberalised air traffic accord with the 27-member group.

The initialled agreement strengthens both parties’ commitment to fair access to markets for Oman and all EU member states and is an important first step in a planned five-year implementation leading up to a fully formalised open skies accord.

The initialling was witnessed by Naif bin Ali al Abri, President of Civil Aviation Authority, H E Najeem Sulaiman al Abri, Ambassador of Oman to Belgium and head of the Omani Mission to the European Union, and Henrik Hololei, Director-General for Mobility and Transport of the European Commission.

Reciprocally, the agreement will allow EU airlines to fly to all Omani airports from their home country or from any other EU member state. Currently, Air France and KLM are the only EU airlines that fly direct to Muscat International Airport. The agreement effectively aims to ease market access to Oman for more EU airlines.

On the occasion, Naif al Abri said, “We are delighted to initial today’s Comprehensive Air Transport Agreement which further strengthens the mutual cooperation and air connectivity between Oman and European Union. Greater economic development through increased air traffic is just one of many benefits of an open skies agreement, and we are extremely confident that the inherent opportunities for tourism and an entire ecosystem of interconnected industries will flourish.”

According to Hololei, the initialling illustrates the successful collaboration of both negotiating teams and further reinforces the close aviation ties between the EU and Oman. “Once signed, this agreement will bring new opportunities, more choice and higher standards for passengers, industry and aviation workers. I look forward to taking our aviation partnership to the next level.”

Abdulaziz al Raisi, CEO of Oman Air said the agreement signifies “a tremendous achievement and defining moment” for aviation and tourism in Oman as well as the European Union. “For Oman Air, it means more choice of destinations and travel options for both our business and leisure guests across an enhanced route network. It also gives European travellers easier access to Oman’s diverse offering of beaches, mountains, wadis, deserts and UNESCO world heritage sites, allowing them to fully experience one of the Middle East’s most sought-after destinations.”

Both sides will now initiate their respective internal procedures to prepare for the signing of the agreement.