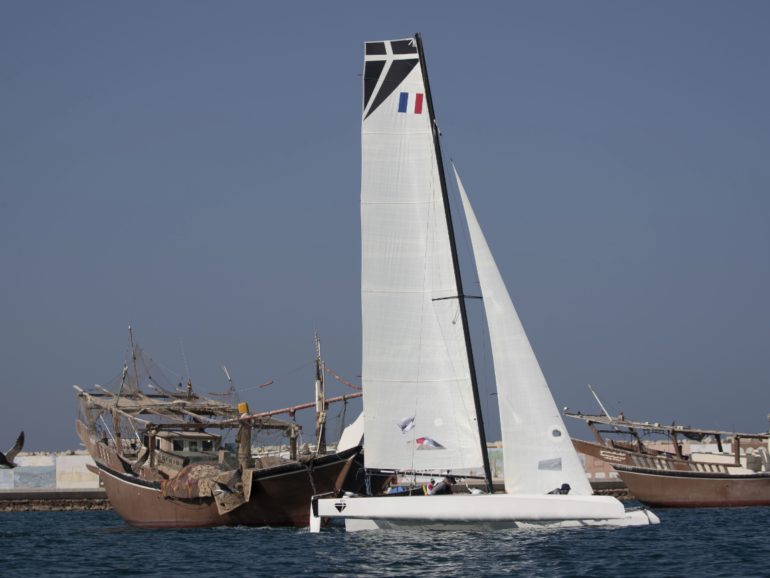 Away from Team France’s dominance, the remaining podium positions during the day were shared throughout the fleet. Oman Sail finished second in the coastal raid with Oman Investment Authority third.

Antoine Rucard, skipper of Team France, said, “Today the races were amazing. We began the day with the coastal race, just outside of the harbour. We turned by the traditional fishing boat, and the wind was very strong. We won the race after a good fight with the Oman Sail team. There were two stadium races with even stronger winds but we won them both. The competition is great; all of the Omani teams are really good. It is great to be fighting for the lead with them and pushing us every step of the way.”

Musab al Hadi, skipper of Team Oman Sail, said, “Today it was a very long day, a big day for every team. We had a different kind of breeze later than earlier. The coastal race was long but close between the teams. We finished second which made the team happy. Then after that we had an in-port race but suffered a collision on the start line so we were sinking, but we were strong and kept focused to finish the race. It was very dramatic but that is the sport, you have to accept it and move onto the next race. We lodged a protest against the team that damaged our boat and were given a redress to finish the day second overall.”

Sulieman al Manji, a local boat builder from Sur, said, “We are pleased to be onsite during Sailing Arabia – The Tour and ready to fix the boats. The maintenance team do everything necessary to prepare the boats, repair damage from the races and make sure the teams can continue. Just like today. This is a great place to sail, the teams are very strong and we are very happy to be a part of the crew for Sailing Arabia – The Tour.”